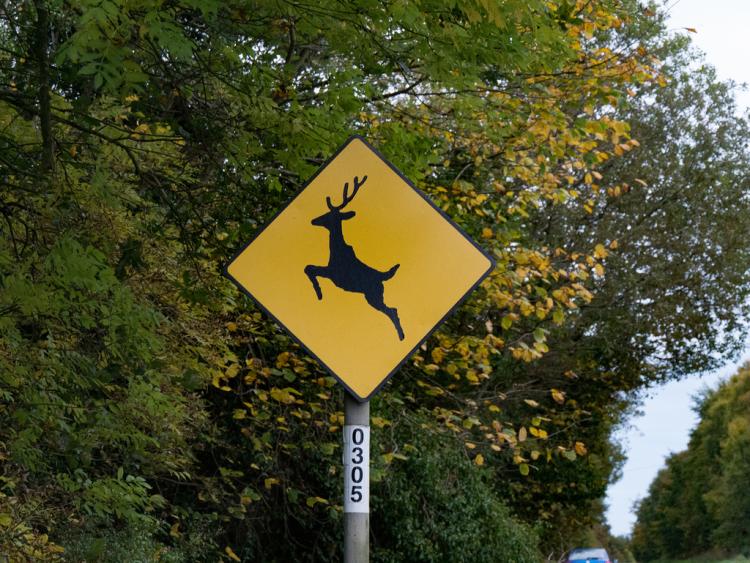 Wild deer crossing busy main roads in Laois have been killed in accidents and caused thousands worth of damage to cars according to a county councillor.

Cllr John Joe Fennelly said the wild deer crossing the roads between Abbeyleix and Durrow and Abbeyleix and Ballacolla are ‘going to end in a fatality’.

“We are having a major problem between the Ballacolla Road and the Durrow Road in Abbeyleix. Before Christmas there were two bad accidents, one woman’s car cost €4,500.

“There is no fencing on either side of the roads as you head out of Abbeyleix on the Ballacolla side and on the Durrow side where the deer are crossing.

“Every year there is between three and four deer killed on the Durrow road and that leaves three or four cars badly damaged and one day it is going to end in a fatality. If a deer crosses and somebody presses a brake and there is somebody coming behind them there is going to be a fatality on it,” he said.

Cllr Fennelly tabled a notice of motion at the January Portlaoise Municipal District meeting asking for ‘deer crossing’ signs to be erected on these roads. Laois County Council said the signs would be put up in the coming weeks.

Cllr Fennelly asked the council engineer if any cash was available to erect fencing, like on a motorway, to stop the deer from crossing.

A senior engineer said that he had not heard of any grants for specific fencing like this.

Cllr John Joe Fennelly said he would follow up to see if there are any grants from the Department of Agriculture or other departments. He said it is too much money for local farmers.

“When you go and drive on the motorway you see all this big fencing for deer. To ask the local farmers or whoever owns the land would be a crazy price to do it but it certainly caused a major problem for drivers on those roads at the moment.

“I do appreciate the signs going up, that might help to slow people down but as you all know, if a deer comes out it doesn’t matter what speed you are doing it is going to destroy your car,” he said.

“Deer just randomly cross the road and cars are coming at speed, I welcome the signage to slow drivers down. I fully support if there are any alternative measures that can be made. I know a girl whose car was practically destroyed from one and she wasn't travelling at any great speed,” she said.