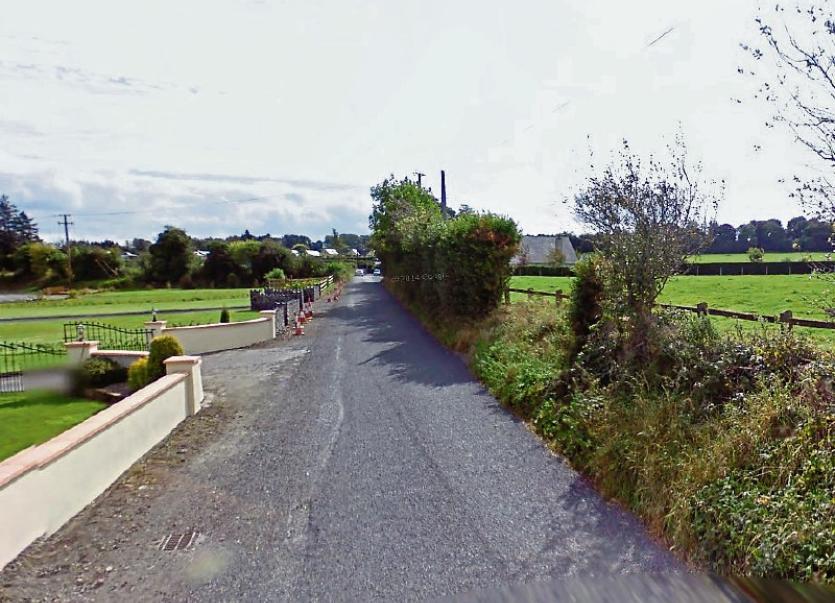 The road near Castletown, Laois where residents are concerned that traffic is damaging the private verges outside their homes

Lorries are damaging privately owned verges outside rural Laois homes, but residents are stuck in a Catch 22 to stop them.

The strips of land outside the walls of roadside homes are there by order of Laois County Council planners, to provide parking and visibility for residents driving in and out.

However traffic meeting on the narrow roads is driving in on these strips of land, which in one area raised recently in Laois County Council, has reportedly damaged drains and caused potholes that the homeowners have to pay to fix.

Residents are free to put up bollards says Laois County Council, but then they will be liable for costs if a passing vehicle is damaged on their private property.

Cllr James Kelly said the problem is “a matter of urgency” for the homeowners in his area.

He tabled a motion at the January meeting of the Borris-in-Ossory Municipal District, for the council to address road safety issues on the L50721 at Danganroe, Castletown.

“I have met residents, they are concerned that the 80km speed limit signs have changed to ones that say Go Mall (slow),” he said.

“The rural speed limit signs on this road are in accordance with the Department of Transport. Parking areas in front of dwellings in the area are private lands,” he said.

“It was seen to infer nearly a target and wasn’t safe to use. We agreed on this variation of an old sign, telling drivers to take it slowly. I can meet residents to explain,” he said.

Cllr Kelly said there is a 200m drive to the GAA club which is busier with a new walkway and ballwall.

“Three closest residents had to set back their boundary wall for planning, but when lorries meet they are driving in on the setback and creating a problem with potholes and drains sinking causing flooding. What’s to prevent residents putting up bollards?” Cllr Kelly asked.

“There is legally nothing preventing them putting bollards up, but they will be liable if anything goes wrong,” the engineer answered.