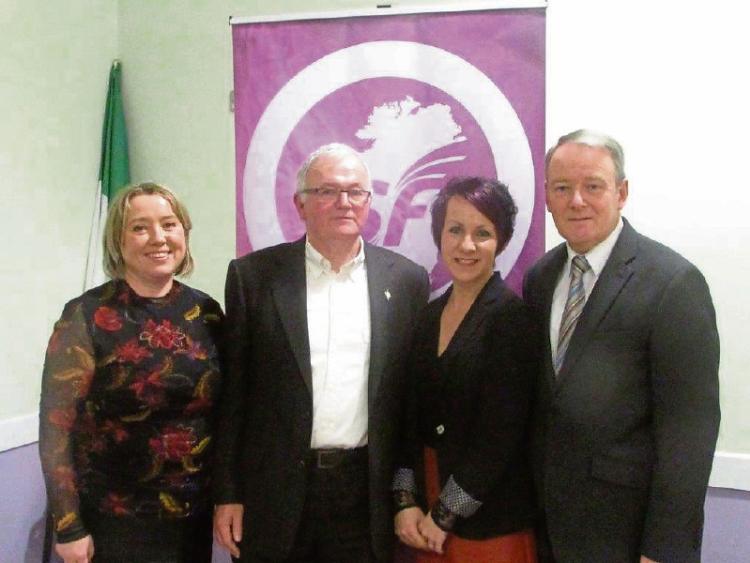 Sinn Féin wants to double its number of councillors on Laois County Council, according to the party's Laois TD who has confirmed some of the candidates on the party's ticket going into next year's local elections.

The party has selected three of their candidates to contest the elections in May to Laois County Council.

John Gormley joins Cllr Caroline Dwane Stanley on the ticket in the Portlaoise Municipal District which takes in Abbeyleix. The party says it is aiming to take a second seat.

The party narrowly missed taking a seat in the Mountmellick/Borris in Ossory District in 2014. This time around Lorna Holohan Garry will contest the six-seat constituency.

The selection process for the Portarlington Graiguecullen District will happen at a later date but Cllr Aidan Mullins will be seeking the nomination.

Deputy Stanley said the plan is to double the representation.

“The party is putting forward a strong team of experienced activists to secure the maximum number of seats on LCC. We currently have two councillors in the county, Aidan Mullins and Caroline Dwane Stanley. It is our aim to try and double this to four and to have the best team possible elected in Laois,” he said.

Ms Holohan Garry lives in Clodiagh Way, Clonaslee and works part-time in the security sector. She is married to Keith and has three children. A Mountmellick native, she lived in the town until moving to Rosenallis 10 years ago. She moved to Clonaslee in 2015.

“Lorna played an active role in the campaign to abolish water charges. She is currently a member of Mountmellick Flood Action Group, Chairperson of Clodiagh Way Residents Association, and a member of the William Brock Sinn Féin Cumann Mountmellick. Lorna is active in community affairs and she has worked closely with Brian Stanley TD on a range of constituency issues,” says SF.

Mr Gormley lives in Ballytarsna, Abbeyleix and has four children. Sinn Féin describes him as a lifelong campaigner.

“John gained valuable experience representing people as a shop steward for 15 years with the Unite trade union at the Department of Defence. He has also been involved in housing and water charges campaigns. A committed member of Community Alert, John wants the expansion of this and Neighbourhood Watch, plus more community policing.

“As a Sinn Féin Councillor he will fight for, retention of Services at Portlaoise Hospital, upgrade of Abbeyleix Hospital and expansion of GP services in Abbeyleix & Portlaoise. John wants high-speedd broadband rolled out to all rural areas and believes it’s essential for jobs,” says the party.

Cllr Caroline Dwane Stanley was first elected to the Laois County Council for the Portlaoise Municipal District in 2014.

A full-time public representative and Peace Commissioner, Sinn Féin says she has been an active republican and campaigner for 20 years. She is a member of the Laois Joint Policing Committee, Laois/Offaly Education & Training Board, Boards of Management of Portlaoise College and Colaiste Dún Masc, LCC Housing Policy Committee and Portlaoise Cemetery Committee.

“Caroline played an active role in several campaigns, such as water charges, improved rail services and retention of services at Portlaoise, Abbeyleix and Shaen hospitals. She has made housing one of her main priorities.

“Since becoming a councillor 8 years ago, she has earned a reputation as an effective, hardworking and outspoken councillor,” says the party. There are 19 seats on Laois County Council. Fianna Fáil have seven and Fine Gael hold six. Apart from Sinn Féin's two, the other council seats are held by independents and one Labour Party councillor.