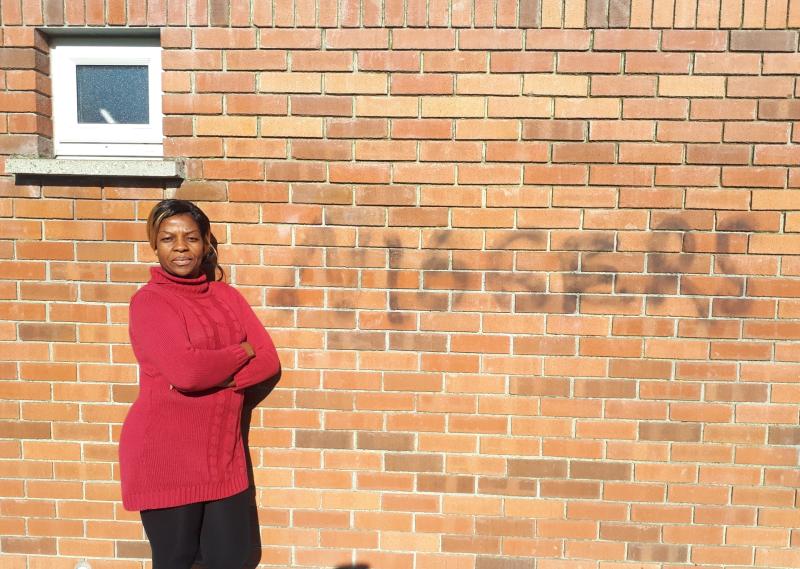 Theresa Gilbather beside the graffiti sprayed on her house

A Laois African family have had racist graffiti sprayed on the wall of their house.

The word ni***rs has been daubed across the house of the Gilbather family in Colliers Wood in Portlaoise.

It was discovered on Thursday February 14 by the owner, Theresa Gilbather, who has lived there with her two children for 10 years.

"Who could do such a thing to us? It is really rude. I don't know who could have done it. I have no problem with anybody," she said.

Theresa is originally from Nigeria and is living in Ireland for 15 years. Her two sons aged 15 and 10 were born in Portlaoise.

"This is our home. We are going nowhere. My sons are upset, I am upset but what can I do," she said.

She called the Gardaí to report the crime.

"It is not something I should ignore. They came and they were very apologetic and said they would try to have more security in the area. I am worried that the person who did this can do something else. I have looked at security cameras but they are expensive," she said.

A health care assistant who commutes to Dublin for her job, she said it has been years since she encountered racism in Portlaoise.

"Years ago my window was broken, and for a while my son was bullied but the principal stopped that. This is a good community here, a very quiet area," Ms Gilbather said.

She thanks a neighbour who has tried to help her remove the graffiti, with thinners and then with a power washer. However she has so far been unable to remove the writing.

"If it is young kids they should be studying their books, not going around looking for something to destroy. Some children don't have the fear of God or of their parents. My sons would not do something like this," Ms Gilbather said.

A Colliers Lane resident who contacted the Leinster Express about the grafitti, says she is concerned.

"I am not one to be easily offended but the escalation of racism from simple words to targeted vandalism is my concern. This is certainly the first I have seen of this in Portlaoise and certainly in this area," said the neighbour.

Over one in five Portlaoise people, 22 percent, are non-Irish, twice the national average. There are now 94 nationalities living in Laois, speaking 57 languages, according to a survey by Laois Integration Strategy.

Read also: Racism not a serious problem in multicultural Laois