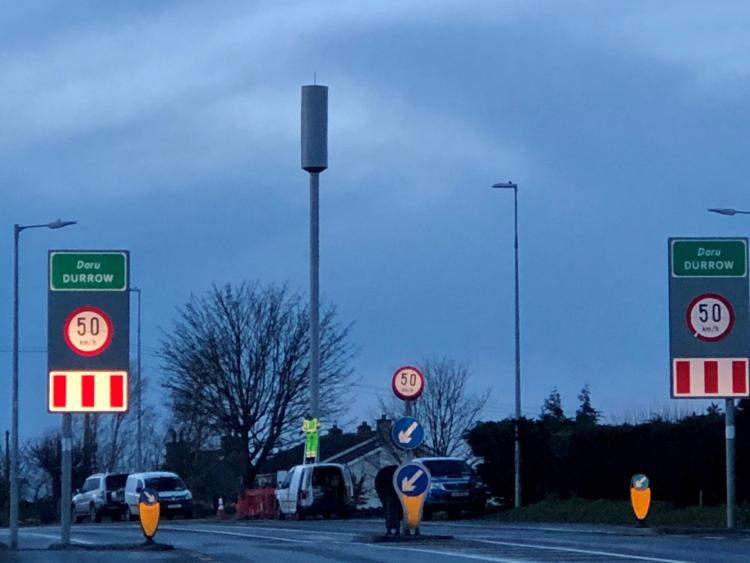 The mast erected in Durrow, Laois which has elicted complaints from Durrow Development Forum

The company behind the installation of new broadband and mobile masts around Ireland has responded to complaints about one such mast in Laois.

Durrow Development Forum has labelled a new 15 metre tall mast as "an eyesore" on their village, the home of the Scarecrow Festival.

The forum which posted a statement online this week with photos of the mast, says it is "disappointed" that no consultation was held with the community by Cignal, a communications infrastructure company that is putting up 300 new masts around Ireland, including ten across Laois.

"Structurally it is an eyesore on a gateway into our village, a village which has been working over the past number of years to preserve and enhance same as a Heritage and Tourism destination. If Cignal Communications and Laois County Council had communicated with DDF and the community of Durrow, an alternative and more suitable location could have been found," the forum posted online.

The CEO who lives in Killenard in Laois has given a statement to the Leinster Express.

“We take feedback from the communities where we locate towers very seriously. I spoke to a representative of Durrow Development Forum last week, and will be meeting them tonight to discuss their concerns. The tower is fully compliant with planning regulations and is important infrastructure that will allow mobile phone and broadband operators offer improved connectivity to Durrow residents.

"As a Laois resident myself I have been very keen to help communities suffering from poor mobile coverage or a lack of high-speed broadband to get improved infrastructure. To date we have a number of new towers in the county including Killenard, Errill, Stradbally, Portarlington, Sheffield & Durrow. The response we have received has been overwhelming positive, and we will be working hard to address concerns raised in this case.” Mr Cunningham said.

Three masts have been licensed so far by Laois County Council. As well as in Durrow, ones will go up at Clonrooske Roundabout in Portlaoise and in Stradbally at the Athy road junction. In all ten masts are planned by the company to go up in Laois. Three more of those applications are currently being considered by the local authority.

Meanwhile Laois County Council has confirmed to the Leinster Express that the masts require individual licences, not planning permission, under section 254 of the Planning and Development Act.

Section 254 is for structures, appliances or cables going on or under a public road, and was amended to include overground electronic communications infrastructure.

"There is no public consultation or public notification facility within the section," a planning official said.

The local authority gets no development levy from the masts. The only income is an application fee per pole is €125.

"This type of development does not incur development charges as they are not planning applications," a planning official confirmed.