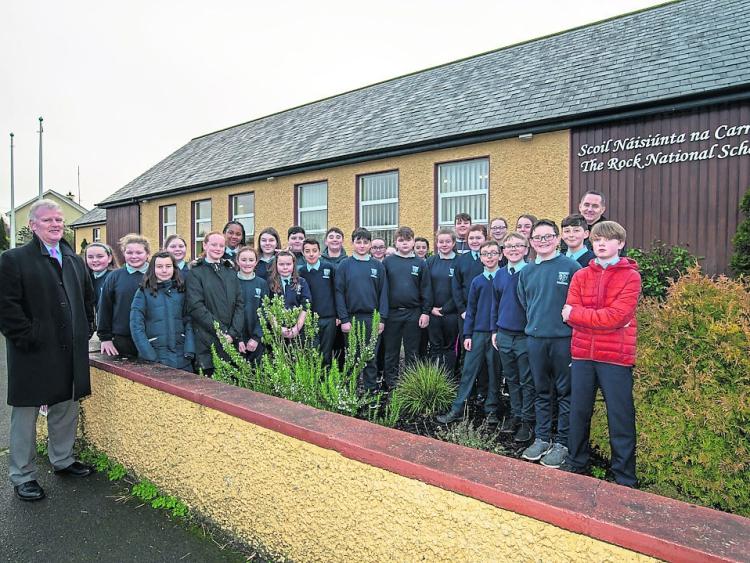 Laois councillors have said they will continue to fight for a footpath in Mountmellick that will cost €250,000 after children in The Rock school campaigned for it.

Sixth class pupils in The Rock National School, Mountmellick campaigned for a footpath between The Rock GAA pitch and the Strahard area of Mountmellick town. All 28 pupils in Mr Fennelly’s class at The Rock NS, which is around 3 km outside of Mountmellick, took matters into their own hands and penned letters which have been praised by councillors.

Cllr Paddy Bracken tabled a notice of motion at the Mountmellick/Borris-in-Ossory Municipal District meeting on Thursday asking the council to extend the footpath from Debbicot to The Rock school.

Senior Executive Engineer for the area, Stan Cullen, said the estimated cost of the footpath is €250,000 which ‘substantially exceeds’ the budget available for footpaths.

“To include drainage, public lighting and footpaths including the repair on the existing footpaths where they have failed in certain locations would be quarter of a million euro,” he said.

Cllr David Goodwin asked if the footpath could be put in for a start and the lights and drainage dealt with at a later date.

“It is a very essential piece of infrastructure and I think if you were to take this notice of motion in the context of what he has put down it mightn’t cost a quarter of a million for what Paddy wants which is a footpath instead of making it into all this other extension of high expense, drainage and public lighting. I mean you have to creep before you walk, let's put the footpath there first and then put the public lighting in. There is nothing there at the moment,” he said.

Mr Cullen said there is no way a path could go in without drainage first and adequate public lighting for safety.

“There is no prospect of delivering a footpath without drainage for a start and the public lighting is required due to the fact that the footpath is outside the urban speed limits where there are high-speed traffic and large vehicles. It is essential for motorists to see any pedestrians as much as the pedestrians to see where they are going so that would be the reason why lighting is necessary,” he said.

Cllr Brendan Phelan suggested pricing the project for now and working on funding it and carrying it out later.

“I would suggest the least you could do is price or estimate the cost of putting a footpath there, I know you can't put half a footpath but estimate the cost and different finishes and let’s establish what drainage is needed. The chances of getting lighting there straight away is almost nil so the thing about it is there is no point in talking about a Rolls-Royce job and we haven’t the price of a Morris Minor.

“I would price it for different options and then we can look at it again over a period. All the councillor are going to support that because the children have all engaged in the system and fair play the teachers backed them,” he said.

Cllr Seamus McDonald supported the motion and said there is a need for the path in the ‘dangerous’ area.

“I think all the councillors in the area got a couple of hundred signatures from people in that area. That is a dangerous area out there and there is fierce activity there at school time,” he said.

Cllr Paddy Bracken said he will continue to pursue the options.

MORE: Laois sixth class pupils have their voice heard over need for footpath