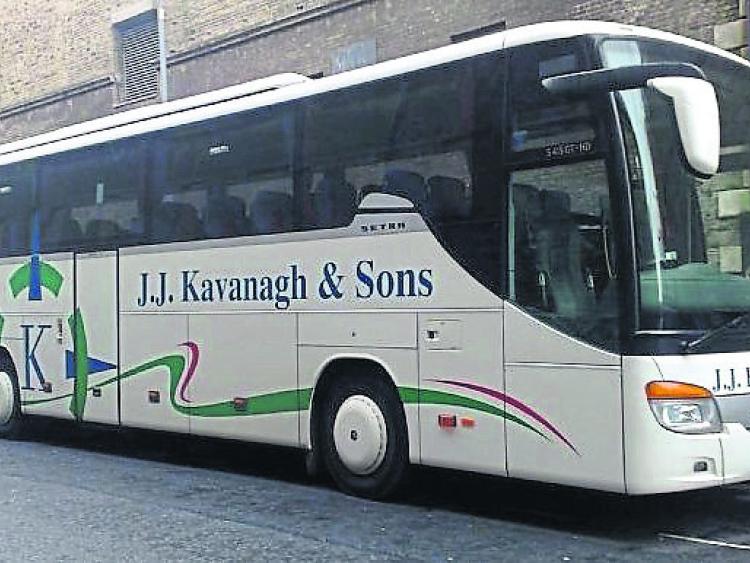 JJ Kavanagh and Son's pulling out of villages in Laois, Offaly, Tipperary and Limerick

The company which is pulling out of rural bus stops on the Dublin to Limerick bus service in Laois says the number of people using services dwindled to single figures.

JJ Kavanagh and Sons also pointed to new State subsidised local services which operates in Laois in the villages where its buses will no longer stop as contributing to its decision.

A spokesperson for the Kilkenny-based company confirmed to the Leinster Express that it would be ending its services from Tuesday, April 16 after being given the go-ahead by the National Transport Authority.

Under the terms of the new licence, Kavanagh's will only serve Portlaoise, Roscrea and Nenagh from April 16. There will be no transition arrangement involving the company to stop at Borris-in-Ossory, Mountrath, Castletown or the Pike of Rushall.

A spokesman said it had operated on the route serving these smaller communities sine 1995 when it took over from another firm which had been set up a private service in the 1980s.

"We have made this decision for commercial reasons. The old route is not profitable any more - people want to travel on the motorway.

"Bus Éireann went off the route four years ago. The reason they went off it is the same as the reason we are going off the route. We tried to stay but to make matters worse, Local Link came in. They are doing three or four runs a day from Borris-in-Ossory, Mountrath and into Portlaoise," he said.

The National Transport Authority says there is no Local Link service on the route but Town Link does operate in Laois.

Kavananagh's spokesperson said nobody is being abandoned. He said people affected can go to Portlaoise or Roscrea to pick up a service.

"Our figures are showing us that there are not that many people travelling. We are also losing customers from the main commuter towns that we go through because they decided to travel with the opposition as they don't want to go through these areas (off the motorway)," he said.

He said the number of people getting on in the Laois village can vary but over has dwindled significantly.

"You are probably talking single numbers each time we go through," he said.

JJ Kavanagh and Sons claim to be the biggest private bus company in Ireland with 180 services. The company is celebrating 100 years in business this year. The spokesman said the decision to cut service had not been taken quickly.

He said the route was very competitive and Limerick and other commuters were not travelling with Kavanaghs because of the number of stops.

"It is not something we take lightly but we have to survive. We have done this on other routes such as Waterford to Dublin where our numbers went up fivefold and hopefully the same thing will happen on the Dublin Limerick route," he said.

He said the terms of the new licence do not allow the company to carry on serving the villages in a transitionary phase after April 16.

The National Transport Authority confirmed that the licence has been granted. It said it has no legislative powers to refuse an application from a commercial operator to reduce or withdraw services from the licence.