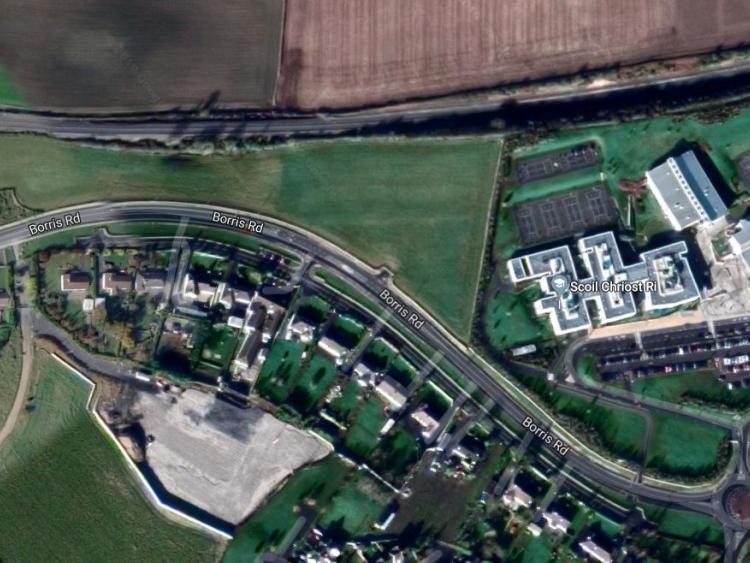 Portlaoise Scoil Chriost Ri and St mary's CBS on the right, site for houses on the left on the Borris Road

Permission has been granted for 23 houses to be built on a site beside two Portlaoise schools that the principals have said will be needed for school expansion.

Principals of St Mary's CBS and Scoil Chríost Rí secondary schools at the Borris Road in Portlaoise strongly objected to the plan by Graham Developments.

They say the land at the Borris Road is needed for the future expansion of both St Mary's CBS and Scoil Chríost Rí schools which are already at capacity with almost 2,000 students on the campus.

Despite strong objections from the principals and Cllr Catherine Fitzgerald and reports from Irish Water, Irish Rail and Inland Fisheries Ireland, the council has given the go-ahead for the 23 houses to be built.

The plan is to build 23 two-storey detached houses with parking at the Borris Road on land to the south west of St Mary’s CBS and Scoil Chriost Rí campus. See the site layout plan here. Text continues below image. 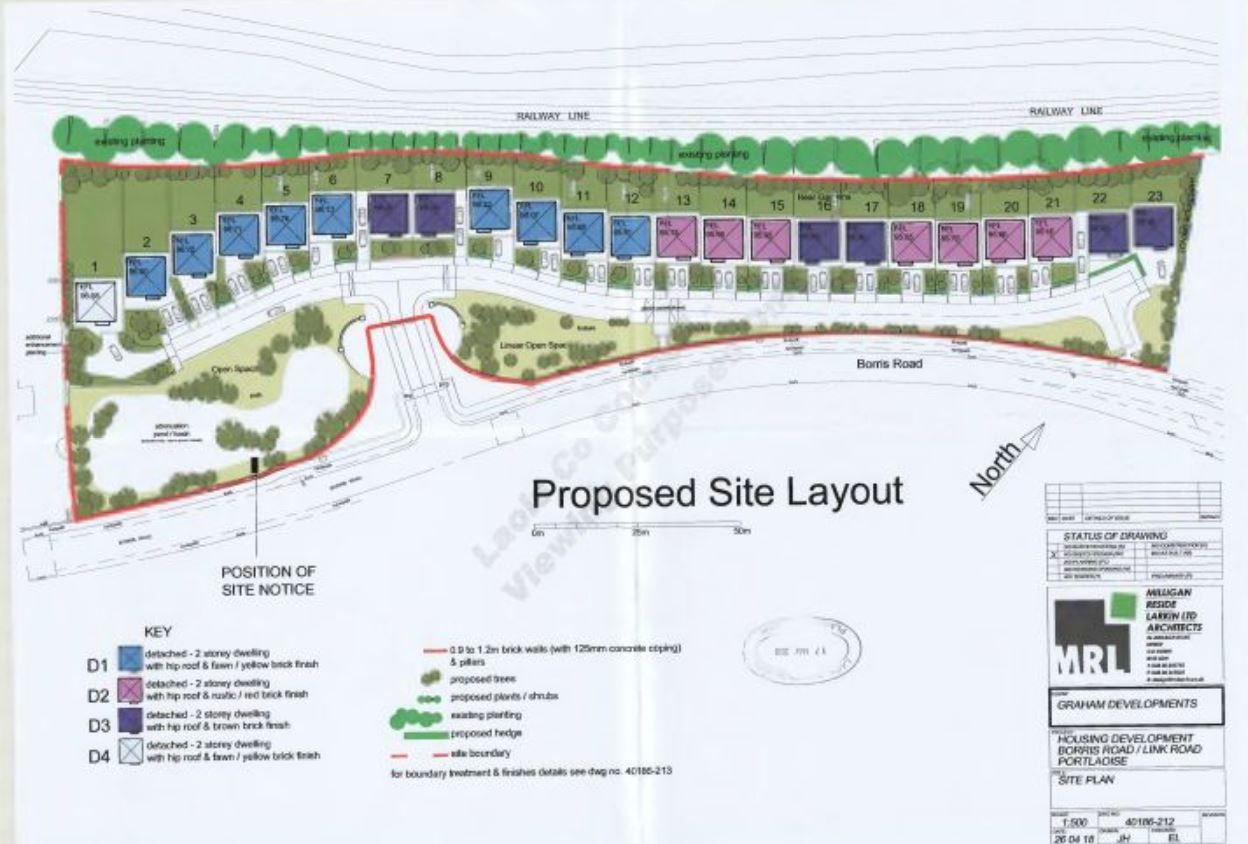 This development leaves part of the site directly beside the school free. A plan by Graham Developments to build 43 houses right up the school boundary was refused in 2017 on the basis that it was ‘partially on’ land zoned for educational use. Although the new plan leaves a piece of land free right beside the school campus, principals still objected to the 23 house plan. See the refused 2017 site plan below. 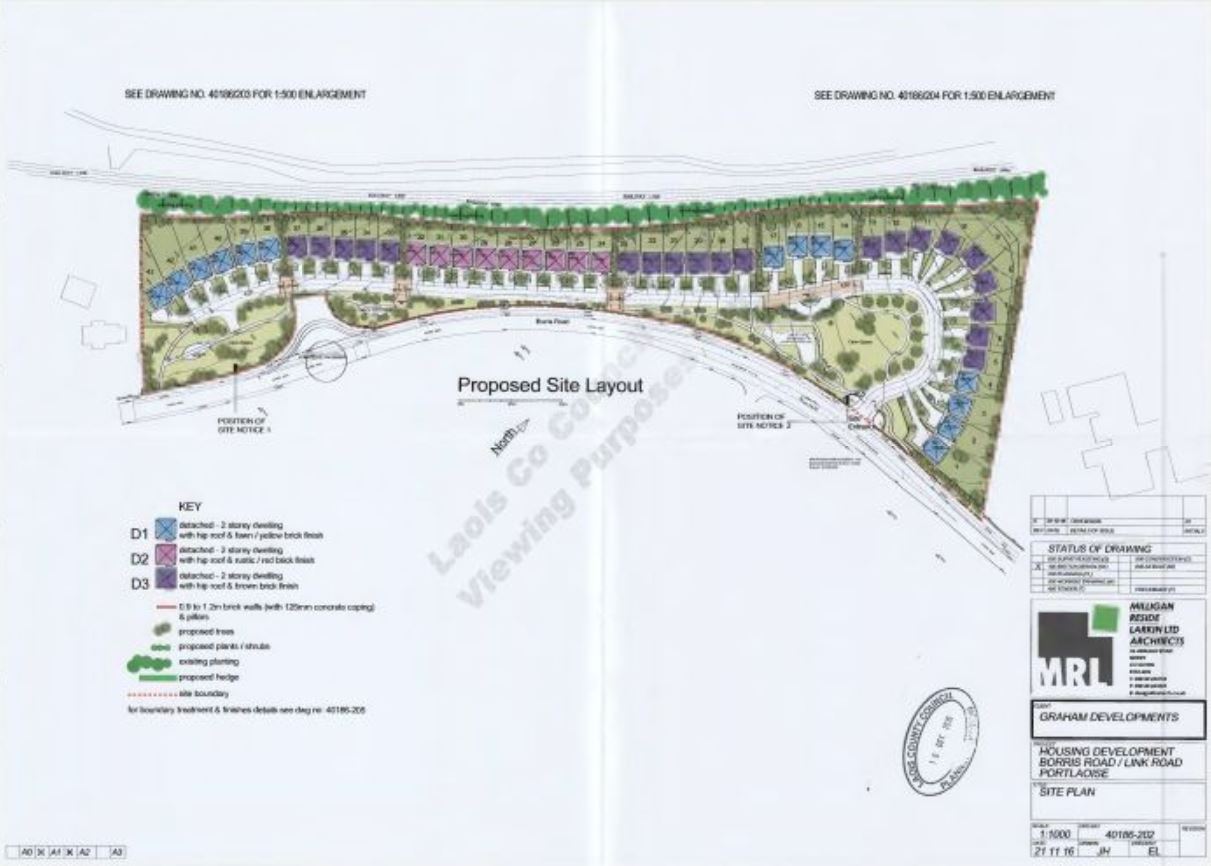 The permission comes with 20 conditions including all damage to the adjoining public road will be made good at the developer’s expense and before the development starts a cash deposit of €6,500 per house will be given to secure satisfactory completion of maintenance on roads, footpaths, sewers, water mains, lighting drains and other services.

The development is classified as urban residential as per Laois County Council Development Plan 2017 - 2023. The total development contribution will be €92,000.

There will be a roundabout at the entrance and Graham Developments will have to comply with the requirements of Irish Rail which has said that due to the proximity of the site to the main Dublin Cork railway line the developer will have to build a 2.4 metre high solid block boundary wall and other conditions.

The principal of St Mary’s CBS, Maura Murphy, made a written submission against the plans stating that given the amount of traffic on the Borris Road she is ‘surprised that this housing development is still being considered’.

“According to many local planners, there is adequate land zoned for that type of development in the Portlaoise area -  that is not beside two schools with a combined population of almost 1,900 students. It would seem folly to remove this ‘green area’ from the possible expansion of the education campus adjacent in future years.

“Although there are many new schools in Portlaoise, we are all aware how quickly the new primary schools have filled up. Our two secondary schools on the Borris Road, adjacent to this referenced land parcel, have reached their capacity, in spite of a new secondary school has opened in the town less than two years ago,” Ms Murphy outlined in a written submission.

The principal of Scoil Chríost Rí, Helen O’Donnell, made a submission asking the planning authority not to allow the housing development to go ahead.

“The Board of Management at Scoil Chríost Rí believes that this land will be needed for further education requirements. The school is at maximum capacity and as in the recent census, the population is increasing rapidly. This is the only piece of land that can be used for any future extension/requirements for our school,” she said.

Cllr Catherine Fitzgerlad also made a written submission against the housing development.

“It is unthinkable that this land is being considered for housing. I believe that this planning is certainly not in the best interest of the community of Portlaoise and its environs,” she said.

Laois County Council's Planning Authority recommended that the entire site beside Portlaoise secondary school campus on the Borris Road should be zoned for educational purposes in the future.

The land, which is owned by Graham Developments was divided into two parts in terms of zoning in the 2012- 2018 Portlaoise Local Area Plan.

In 2018, the planning authority recommended that the entire piece of land should be zoned for the school’s future. Graham Developments strongly objected to this and made a case that the land should be partially zoned for new houses to be built in the prime location next to the school.

The Planning Authority took this submission on board and prepared a Chief Executive’s Report which recommended that the land is zoned partially for new houses to be built and the remainder of the land be retained for education.

This CEO report was presented to the elected representatives of Laois County Council who accepted this recommendation.

In the final published Portlaoise Local Area Plan for 2018 - 2024 the land was zoned partially for new housing to be built and partially for educational development.

In May, 2018 Graham Developments sought planning permission to build 23 new houses on the land that is now zoned for housing. The decision on zoning did not come before the council until July 2018 and the new zoning was not adopted until October 2018.

Graham Developments made a strong objection against all of their land beside the Borris Road school campus being zoned for educational purposes when this was suggested by the council.

In its written submission to the Portlaoise Local Area Plan 2018 - 2024 Graham Developments stated 11 different reasons why the land should be zoned in their favour - partially residential and partially educational.

Some of the reasons outlined included that the site was in an area where there is a need for housing and the narrow physical shape of the site suited individual housing opposed to ‘large floor plate development’.

Graham Developments pointed out that there is an existing buffer of undeveloped-zoned Community, Educational and Institutional land between the existing schools and the site for the new houses.

It noted that the existing school campus has not expanded since the acquisition of land in 2003 and there are no current pending planning applications.

Graham Developments also stated: “We can confirm that the Department of Education has not suggested any expansion of their existing campus onto our lands and have indicated their preference for the provision of a new school on the west side of Portlaoise.”

The well-known housing developers which has a base at James Fintan Lalor Avenue, Portlaoise stated its ‘strong objection’ to the zoning of the entire site for educational development in the local area plan.

This objection was taken on board by the planning authority and written into the draft Chief Executive’s Report where it did not receive any objections before the council. This paved the way for houses to go ahead on the site.