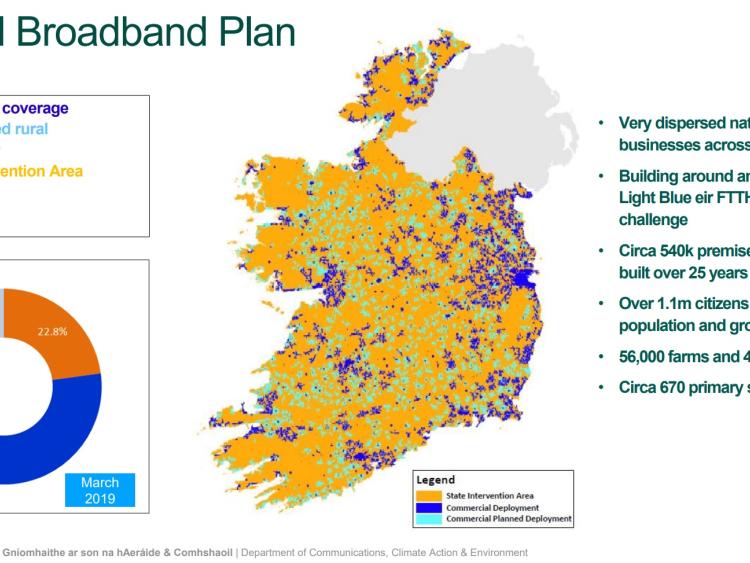 A price tag of nearly €50 million has been placed on connecting more than 12,000 premises in Laois to high-speed internet under the National Broadband Plan.

Figures published by the Government also reveal that Laois represents the fifth cheapest county of the 26 counties in the Republic to cover under the controversial €3 billion contract.

Government data shows that there are 12,772 premises in Laois in the so-called amber area to be covered through the multi-year project.

Details show that of the 39,253 premises in Laois, 24,415 are located in a 'blue' area which includes premises covered by commercial broadband operators. A further 2,066 are located in a light blue area which represents planned rural deployment and will reduce once premises are passed.

As for costs, the estimated investment required in Laois is €49 million. This does not include VAT and contingency.

Once the contract is signed the first step will be to roll out nearly 100 Broadband Connection Points around Ireland by end of year one. There will be 11 in Laois.

The National Broadband Plan defines high-speed broadband as delivering a minimum speed of 30Mbps download and 6Mbps upload in a 'reliable, high quality and consistent manner'.

Read also: WHAT IS THE BROADBAND PLAN

One Laois woman welcomed the project. Speaking to the Irish Independent Helen Gee of Gee's Jams in Ballypickas said her broadband drops and is affected by bad weather.

However, she pointed to mobile wireless coverage as presenting the biggest problem.

"If you travel about a mile-and-a-half up there road there is a dip, there is nothing at all, you wouldn't event get a signal for a phone call. It depends where you are.

"If you are driving through there and get a phone call it just doesn't happen," she said.

She said her staff experience dips all over Ireland.

The plan promises that every home, farm, school and business in Ireland will have access to high-speed broadband.

Ireland becomes one of the first countries in the world to ensure that those in rural areas have the same digital opportunities as those in urban areas.

"As Taoiseach, it's my job to imagine the future and think about what it's going to look like. When I do that, I think of things like homeworking. Already some multi-nationals employ a quarter of their staff from home. They require high-speed broadband and secure connections. At the moment, many people living in Rural Ireland are excluded. I have seen students in small rural and island schools being able to study subjects like physics by video-link to a larger school. This will be even more common in the future. As a doctor, I am fascinated by technological developments in healthcare. Remote medicine is emerging all over the world. Access to broadband affects many parts of Ireland, and it requires a national solution. So that we can connect with the world, with family members, with businesses, with new ideas and new ways of doing things."