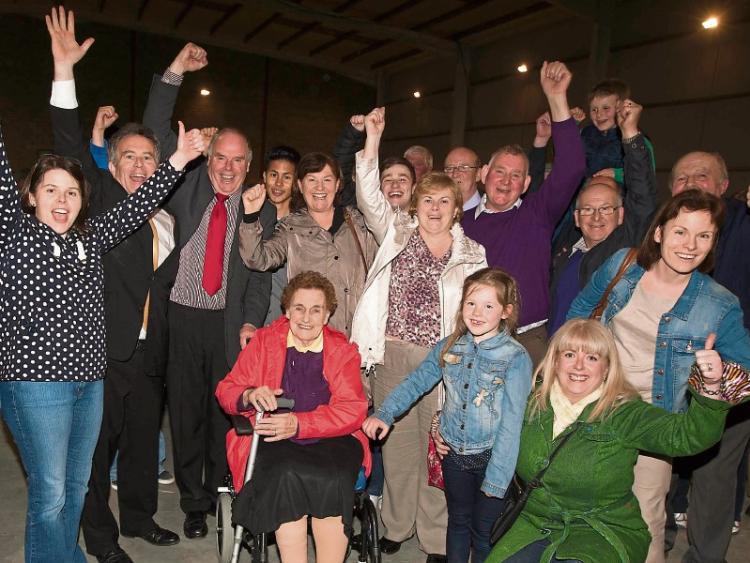 Celebrations after the 2014 election.

The shadow of the late Jerry Lodge looms over the Portlaoise District and people who voted for him for a half century will have a say in the outcome of the big vote.

The passing of the Fianna Fáil councillor left a void that has already caused a row and resignation from the party which has struggled to reap richer dividends in Portlaoise in the past.

Rows are never good going into elections and FF can hardly afford fall outs given their track record in Portlaoise in local elections.

Lodge's departure from the scene paves the way for an new face if not party on the council.

Portlaoise hospital also looms over this election. While councillors have little power in deciding its future they have a voice as public representatives to fight for the retention of services.

The shortage of housing must also be another issue that affects many families. It is an issue councillors are directly involved in solving.

It is hard to see serious challenges being mounted by the heavy vote-getters who led the way the last time out.

Like all frontrunners, Willie Aird, John Joe Fennelly, Mary Sweeney and Caroline Dwane Stanley will hate to be called favourites.

But there is no getting away from the fact the each of them has built election machines of different types to be fairly certain that they have what it takes to be returned to represent the Portlaoise District which takes in Abbeyleix and Ballinakill.

There are a few issues that could upset the apple cart such as voters wanting to kick Fine Gael, Sinn Féin's loss of momentum and even Fianna Fáil's problems in Portlaoise. It is unlikely that the frontrunners will be impacted by any of these factors.

The fun and maybe carnage starts when it comes to the final three seats which are up for grabs.

The field of candidates is big and diverse but many of the candidates are not serious contenders.

The candidate who always struggles for votes but should get over the line is Catherine Fitzgerald. She would be a favourite if her electoral vote-getting record was more convincing.

That being said she should be safe and is likely to see some of the Lodge vote coming in her direction.

That leaves just two seats to be divided up among the rest.

Cllr Pauline Madigan and Cllr Noel Tuohy will be in battles to retain their seats.

Cllr Madigan has had the support of her party leader Micheál Martin on the canvas. She is an FF general election candidate. To be taken seriously, she has to win the seat she took after Cllr Lodge passed away.

But she faces stiff opposition. Dominic Dunne is sure to attract support. He walked away from Fianna Fáil in a row over candidate selection.

Another man who must have a chance is Donal Kelly. He claims to have been part of Lodge's team and will believe securing some of these votes will help him deliver.

The other two serious contenders must be Cllr Noel Tuohy of the Labour Party and Thomasina Connell of Fine Gael.

Cllr Tuohy will be hurt if he does not get returned. He will believe he has delivered on the mandate he received last time around.

From her good performance in the 2016 general election, Ms Connell has already shown she can win votes. However, local elections are different and she was based to the east of Portlaoise and Monasterevin last time.

All the candidates must be praised for having the conviction to go before the electorate but most will be disappointed.