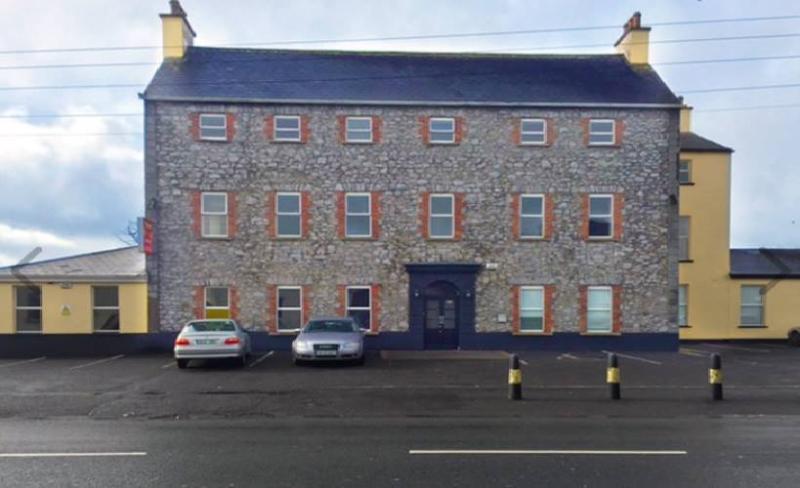 The East End Hotel in Portarlington

The agency responsible for asylum seekers in Ireland has said it has a legal obligation to protect the identities of those in the international protection system but a local councillor says the 'secrecy' brings out 'keyboard warriors'.

The Reception and Integration Agency could not directly confirm if people have moved into the former East End Hotel in Portarlington while they await space in a direct provision centre because they 'have a legal duty to protect the identities of persons in the international protection process'.

The lack of information available to the public on what is going on is causing ‘keyboard warriors’ to react and comment online according to Cllr Aidan Mullins.

Sinn Fein Cllr Aidan Mullins in Portarlington said that 17 adult men recently moved into the former East End Hotel in the town and he believes that this will increase to 30 people.

Cllr Mullins said that no information has been made available in relation to this new accommodation centre.

He said the lack of information is not a good policy.

“There’s a tender process the government organised in March and I believe this accommodation provider is part of this process.

“I understand that 17 adult males are there. They are from a variety of nationalities African, Eastern European, Albanian, all backgrounds.

“They are being catered for by a local catering company, three meals a day.

“The big issue is not that anyone is objecting to it but the community should have information.

“There are 12 bedrooms in the hotel and I believe that upwards of 30 people will be put in there and works are ongoing to provide further accommodation.

“If these people are seeking international protection in a Direct Provision centre they are entitled to that but people don’t have any information about what is going on and they go online and become keyboard warriors making comments.

“The majority of people have no issues with it.

“The secrecy and lack of transparency I don’t get it, we can see that they are there. Are you looking at children needed places in schools, people needing medical services or is it a halfway house and they will be moved on again?

“The RIA has issued a generic response and has quoted GDPR even though we are not asking for people’s names. Keeping people in the dark is not a good policy,” he said.

A spokesperson for the RIA told the Leinster Express that 'any premises' used for temporary accommodation is in response to an advertisement.

"Any premises offered to the Department of Justice for temporary accommodation was in response to advertisements placed in the national media in January of this year. The advertisement sought bed and board in hotels and guesthouses on a 12-24 week basis.  During this period, RIA will work to identify additional accommodation centres and work with persons in accommodation centres who have status to move on and free up capacity," the spokesperson said.

Emergency Accommodation for asylum seekers is also being provided in a Rathdowney guesthouse. The Department of Justice called this emergency accommodation a ‘safety net’ for people seeking asylum in Ireland but said ‘the system is very stretched’.

The nationalities of these people in emergency accommodation in Rathdowney and Portarlington cannot be revealed due to a right to privacy.

The number of people, their nationalities, whether there are children or adults or whether children need spaces in school cannot be revealed to protect their identities.

Asylum seekers in Ireland are entitled to full board accommodation, weekly allowance, access to medical cards, education, work permits and other supports.

MORE: 'Nothing' in this Laois town for asylum seekers sent there