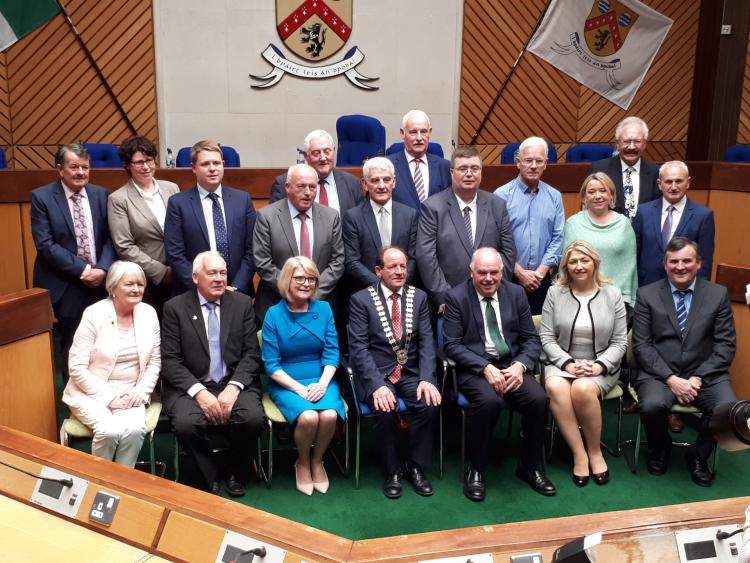 The new Fine Gael Cathaoirleach of Laois County Council has said that he hopes to work on the number of people commuting out of Laois every day by pushing industry into council owned lands at Togher, Portlaoise.

Cllr Willie Aird was elected as Cathaoirleach of the council today for the second time in his 40 year career as a public representative.

Speaking after his election in the presence of Laois TD and Minister for Justice, Charlie Flanagan, Cllr Aird said one of the best moves the council has made was buying 72 acres of land at Togher.

“The greatest thing we have done for the county is that the Chief Executive on the recommendation of the council purchased 72 acres of land in Togher, one of the greatest achievements in the past five years in my opinion.

“We have the ship all we need now is the crew, we already have two sites sorted in that that is a great achievement for us there is a spin-off of the county in that we can bring the industry into that.

“Brexit at the moment is favouring us and hopefully it will continue and those jobs will be for Laois.

“I want to see as many people as we can not having to commute out of our county each morning because there are thousands of people young and old leaving our shores here at 5 o’clock each morning with the traffic on the roads going to Dublin. We are going to endeavour to see if we can take that back a bit,” he said.

Cllr Aird welcomed Minister Flanagan to the AGM and said it is great to have a Minister in the county, especially a Minister for Justice.

He said the closest project to his heart is the courthouse in Portlaoise where a site has been delivered thanks to Minister Flanagan and the Council Chief.

Cllr Aird remembered his late mother on the occasion and was emotional speaking about the late Jerry Lodge and Kathleen O'Brien.

"The one regret I have and the only regret is that my mother never saw me as Cathaoirleach of the council and it is very unusual I have to say and I have to talk lightheartedly to keep up but my mother died this day in 1991 on June 7 and the local elections hadn’t taken place they took place 11 days after," Cllr Aird said it was a difficult time.