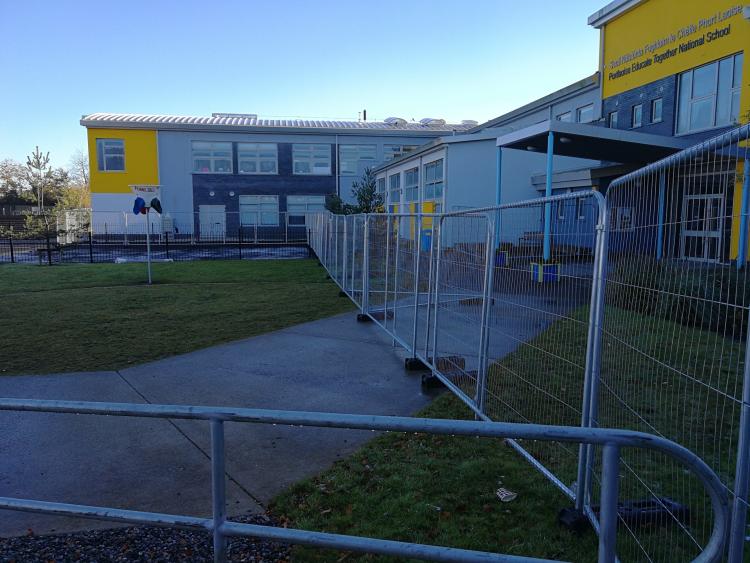 Extensive fencing in place at Educate Together NS and Gaelscoil Phortlaoise.

Construction workers are set to begin work this week on 'permanent' repairs to Laois schools in Portarlington and Portlaoise as part of a national plan, the Minister for Education and Skills Joe McHugh has confirmed.

Three Laois schools have to be repaired. They are: Portlaoise Educate Together, Gaelscoil Phort Laoise and Presentation Convent Portarlington. Maryborough National School will be subject to further checks.

The structural remediation work will be carried out by John Sisk & Son and overseen by Arup Engineers. The delivery cost of the programme by the Department of Education and Skills is being supported by the National Development Finance Agency.

A Department statement said information sessions have been held for principals and management of the 22 schools and their patrons. It said each school has been given a brief on the detail of the permanent remediation works to be carried out in their school.

“The timetabling of works and arrangements for contractors to be on site have been designed to ensure all schools can re-open as normal at the end of the summer holidays," he said.

Structural remediation will commence in 14 schools initially, as and when they close for the summer holidays. This work will roll over to the remaining eight schools.

The Department said that if the work is not completed by the end of August, contractors will carry out the remaining work outside of school hours to prevent disruption.

The Department’s added that planned fire safety remediation work will continue in all 22 schools involved in alignment with the structural remediation programme.

The Minister said he was aware of the difficulties that problems caused.

“Safety remains our number one priority. We targeted the summer holidays to get as much of the structural work done as we can, so that the precautionary measures can be removed from the schools as soon as the permanent works are completed.”

“I am fully aware of the difficulties that this issue has caused for principals, teachers, parents and pupils as they go about their day to day business.

“I am glad that we have now reached the stage where we can implement works that will enable the schools to return to a normal school environment as quickly as possible.

“I want to sincerely thank all the schools’ patrons, the boards of management, principals and entire school communities as we work our way through this complex issue,” he said.

The schedule has been created with the aim of having as much of the works as possible completed in the 22 schools by the end of 2019.

Alongside the first tranche of remediation works, the Department is also carrying out detailed structural investigations of another 17 schools built by WBS but which did not require initial precautionary measures. These investigations will take place during the summer in parallel with the permanent remediation works at the other 22 schools. This is a follow-on from the initial assessments in those schools carried out in October/November 2018.

A separate approach has been taken to address the structural issues in Ardgillan Community College, Balbriggan, Dublin, part of which remains closed. The Department is continuing to work with the engineers to arrive at an appropriate solution and the school’s patron is being advised of progress. Any interim accommodation needs at the school will be met.

The Minister also said that he was commissioning an independent review of current practices in the Design and Build (D&B) model for the delivery of school buildings (or other similar public buildings) internationally and that he would be announcing the organisation to carry out this work shortly.

“This approach will be a precursor to a broader review of the Department’s D&B programme,” the Minister said.

“I have always made it clear that I am committed to a full review of the Department’s D&B programme. The broader review will take place when the legal process has been completed,” said the Minister.

A programme of initial structural assessments was carried out in October and November 2018 at 42 schools constructed by Western Building Systems.

The Department continues to liaise with the Chief State Solicitor’s Office and the Attorney General’s Office on the on-going legal process.