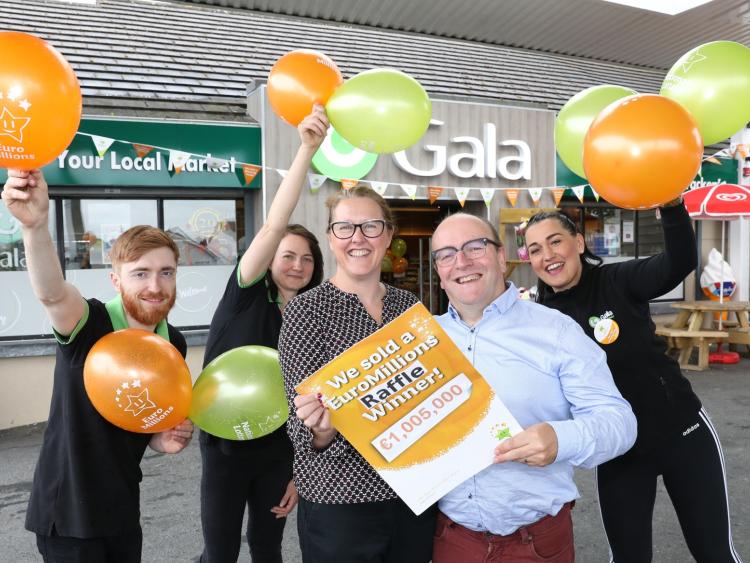 There is huge speculation and excitement in Laois over who the lucky €1 million EuroMillions lotto raffle winner is.

The winning ticket for the ‘Ireland Only Raffle’ was sold in Bracken’s Maxol Gala store on Stradbally Road in Portlaoise. The draw took place on Friday and the National Lottery revealed the winning location.

Word on the street is that the winner is a local person but on Monday, the National Lottery and the shop owner said no one has come forward to claim the prize yet.

Speaking to the Leinster Express, Bracken’s Maxol Gala owner, Maeve Bracken, said there are plenty of customers making jokes and there is a ‘big buzz’ after the exciting weekend.

“It has been fantastic, very positive and it is the first time we have sold a big winner.

“We are hoping it is someone local but we have heard nothing yet.

“It’s Monday now so somebody might claim the prize today, it could be someone passing through or we get a lot of people from Beladd, and staff in the hospital or ambulance drivers.

“We sell most of the tickets on Friday afternoon but you can do a month's worth in advance so it could have been bought any time.

“We got a call from the National Lottery rep around 10 pm on Friday night as we were just closing up. It’s not the normal draw it is a raffle and normally the raffle prize is €5,000 but every now and then it is €1 million.

“It is a big buzz and it’s funny people are coming in making a joke and having a laugh about it, it is a lovely amount of money.

“Probably €10,000 was the biggest win we ever had before this. It’s everyone’s dream somewhere along the line to have €1 million and think about what they would do with it. Then we had the Laois win yesterday so it has been a great weekend all around!” she said.

The ‘Ireland Only Raffle’ winning code, found on the winning EuroMillions ticket, is IGMS26203. Check your tickets!

Have you checked your #EuroMillions tickets from last nights draw yet? You just might be Ireland’s Newest Millionaire

The winning ‘Ireland Only Raffle’ ticket worth a cool €1million was sold in Laois. Check tickets at https://t.co/gmmNILmBOZ pic.twitter.com/UiaLA9hzaq

Someone in Co Laois may well have woken up as Ireland’s newest millionaire this morning as the winning ticket for Friday’s night’s EuroMillions ‘Ireland Only Raffle’ draw, worth €1 million, was sold in Bracken's Gala store on Stradbally Road in Portlaoise.WAS IT YOU?! pic.twitter.com/xpdn9N8F8L

Portarlington crash victim was a nurse in children's hospital