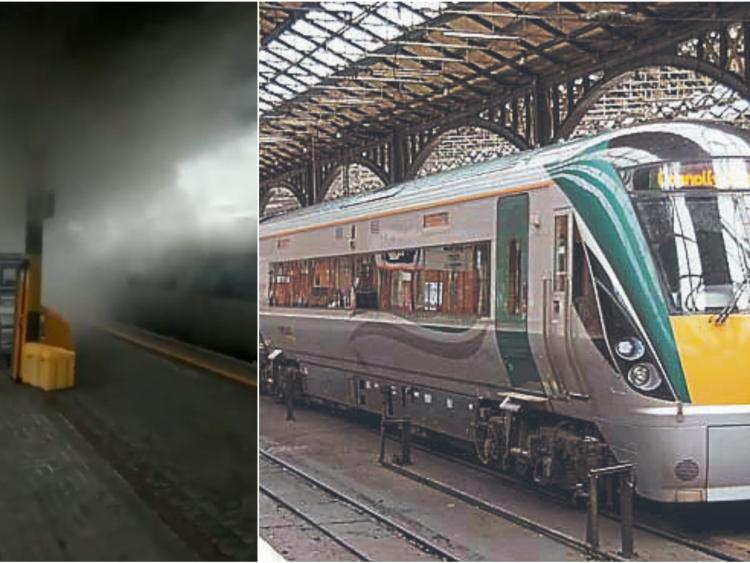 Emergency services were called to a fire on a Laois train as it arrived into Dublin's Heuston Station on Monday evening.

Irish Rail is investigating the incident which happened on the busy 5:25 pm Portlaoise to Heuston train.

A spokesperson for Irish Rail told the Leinster Express that the fire appears to have been in the engine area of the front carriage and no passengers were injured.

"The fire appears to have been in the engine area of the underframe of the front carriage. It was confined to this area and did not affect the passenger area, nor were passengers at risk.

"The automated alert system on the train registered the issue seconds before the train finished its journey in Heuston.

"Fire suppression systems on the train activated, and while the fire brigade was called, the fire was fully extinguished by staff.

"In line with our procedures, passengers were asked to leave the train (as it was the final stop they would, of course, have been preparing to leave the train in any event). The incident is being investigated," the spokesperson said.

This tweet by Kevin Purcell which was sent to him by a passenger shows the scene of the fire.

Investigation launched by @IrishRail after a fire broke out in the underframe of a carriage on the 17.25 service from Portlaoise as it arrived into Heuston yesterday evening. The company says passengers were not at risk. (Video from a passenger who was on board) pic.twitter.com/t4MQSMHWoS

A number of trains from Portlaoise to Dublin were cancelled this week due to 'operational issues'. Irish Rail has said the reason for this is 'driver availability'.

Due to operational problems the 11:25 Portlaoise Heuston and 13:20 Heuston Portlaoise are cancelled today. The 09:25hrs Cork Heuston will serve Portarlington, Kildare and Newbridge. The 13:25hrs Heuston Galway will also serve Newbridge and Kildare

The public train service is running additional trains this weekend for the thousands of GAA fans who will travel to and from Croke Park, including Laois people.

Match Specials: Extra services added for Sunday's games. 08.15 from Cork and 9.14 from Ballybrophy. Also a 19.23 from Heuston - Ballybrophy all available online now.