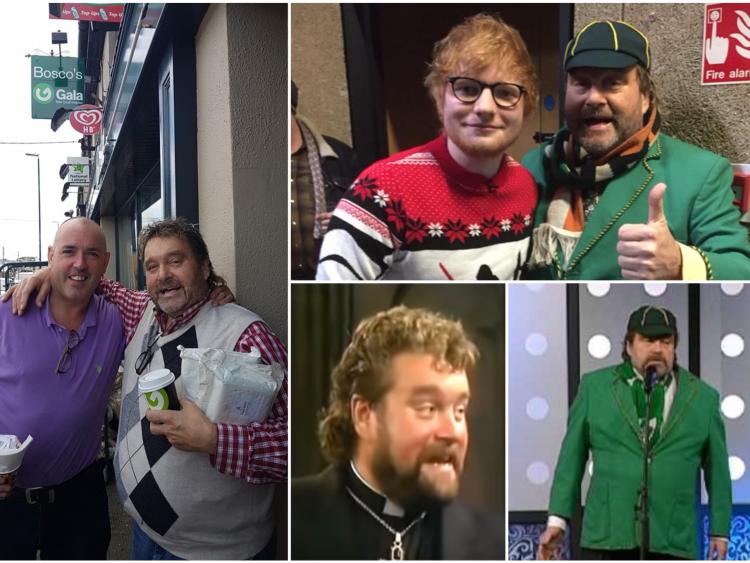 Legendary Irish comedian Brendan Grace never asked for a thing only a bottle of water before a show at the Dunamaise Arts Centre in Portlaoise.

He was ‘easygoing, lovely and had no airs or graces’ according to Front of House Manager at the Dunamaise, Martina Lawless.

Tributes are pouring in for the late Brendan Grace who died peacefully in hospital in the early hours of the morning, following a short illness. His family was at his bedside.

The entertainment industry has lost one of the greats who brought his show to Laois many times over the years.

Martina Lawless told the Leinster Express that he was always a pleasure to deal with and the local audience loved him.

“Brendan was always friendly and down to earth, he had no airs or graces and was lovely to everyone here.

“He played here a couple of times in the last four years. Every time he came he was the same Brendan Grace.

“He always insisted on doing a meet and greet with the audience after the show he made a point of doing it and taking time out for pictures with people. We loved having him here, he was always so easygoing and he never asked for anything except maybe a bottle of water on the stage.

“You would have some people who ask for specific things in the green room but not Brendan, he’d come in have a laugh and a chat and that would be it.

“We saw all ages coming to his shows here at the Dunamaise, everybody loved him because he was a family comedian. Any age could come and see him and they would never be put out by it,” she said.

Michelle de Forge is the Director of the Dunamaise Arts Centre.

“On behalf of the Dunamaise Arts Centre, we are so sorry to hear the very sad news of Brendan Grace’s passing. He had a great local loyal following here in Laois and was always full of life and laughter getting a great response out of the audience. He was a lovely man and he will be greatly missed,” she said.

One of Grace’s most recent shows in Laois was in the Abbeyleix Manor Hotel on January 30 this year. It was yet another sell-out show as Laois people showed their loyal support to Grace after a 50-year long career as a stand-up comedian.

Bosco’s Gala in Portlaoise paid tribute to a ‘legend and friend’ with a picture on Facebook.

Brendan Grace Has Passed away .God Rest him and thanks for the laughs !! You were a legend !! pic.twitter.com/ycM0zXF2JB

"It is with deep sadness and regret that we announce the passing of Brendan Grace, Ireland’s most beloved entertainer, Liberty Boy and grandmaster of Comedy.

"Brendan passed away most peacefully at the Galway Clinic at 26 minutes past midnight, Thursday 11th July. He did so, surrounded by the profound and everlasting love of his heartbroken family.

"Brendan’s family wish to express their gratitude for the many messages of support and outpouring of love from his adoring and loyal fans.

"We would also like to express our deep gratitude for the Nurses, doctors and staff at The Galway Clinic, who cared for Brendan with such loving dedication.

"We have lost a very bright star. May he watch over us always and rest in peace.

"Please feel free to share your stories and memories and help us celebrate the life that Brendan lived to the full and the much joy he has brought to so many over the years."

President of Ireland Michael D Higgins has led the many tributes to the Dublin comedian.

"As a comedian, Brendan's spontaneous wit and his sense of timing, his obvious delighting in interaction with his audiences, meant that Brendan's sense of humour was drawing from, and itself a profound contribution to, the deep wellspring of Irish wit.

"His best-loved characters will endure, precisely because they are both recognisable and representative of the experiences lived and recalled by Irish people of all ages.

"It was a privilege to know him, and a pleasure to meet Brendan as recently as the 5th of June last, when he accompanied The Forget Me Nots choir to a Garden Party at Áras an Uachtaráin.

"As President of Ireland, I express my deepest condolences to his wife Eileen, his children Bradley, Melanie, Brendan and Amanda, and to his wider family and his friends, and all who valued his acuity and sharp sense of humour.”

RTÉ paid tribute and will air his documentary Brendan Grace – Funny Man tonight at 10.15 pm on RTÉ One.

"Brendan had a remarkable career as a comedian and entertainer that spanned five decades. In October 2018, to mark Brendan’s 50 years in the entertainment business, RTÉ screened the documentary, Brendan Grace – Funny Man, which was directed by Brian Reddin and looked back over the brilliant career of Ireland’s favourite funny man.

"Shot on location throughout Ireland the UK and Boston and featuring interviews with a who’s who of the Irish entertainment business, this documentary offered a revealing and often hilarious portrait of a performer beloved by everybody."

Brendan Grace was known for his comedy schoolboy character "Bottler" and his 1996 appearance in the Irish TV sitcom Father Ted as Father Fintan Stack as well as a hugely successful career of touring his live shows to packed venues.