UPDATE: Over €2,000 raised, job offer and place to live for young homeless man in Laois 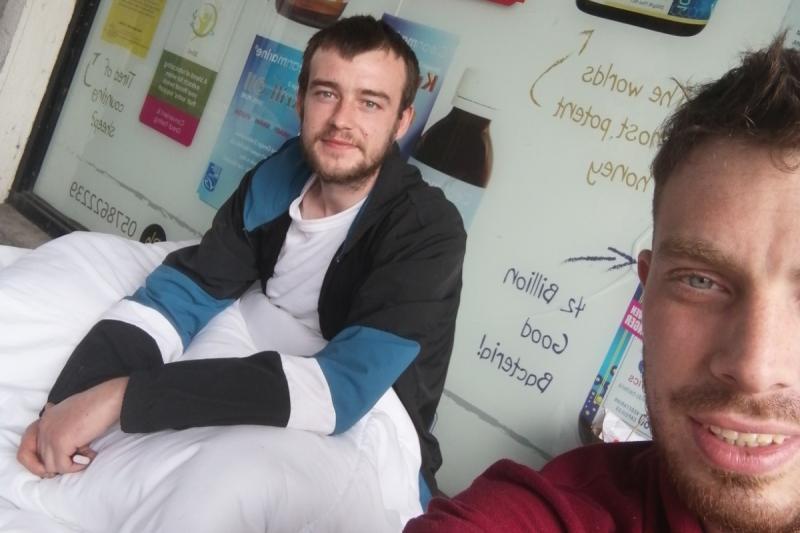 UPDATE: Over €2,000 raised, job offer and place to live for young homeless man in Laois

An online fundraiser for a young man sleeping rough in Portlaoise has raised over €2000 and resulted in a job offer and accommodation thanks to the generosity of Laois people.

Dean Maher from Stradbally befriended the homeless man, Graham, who is originally from Belfast after work one night when he saw he was sleeping rough in Portlaoise.

The two had a good chat and Dean decided to set up a fundraiser. People from Laois and beyond have donated to Graham’s cause and with the help of Dean and his friend Declan Anderton, he is getting back on his feet.

Dean told the Leinster Express that a local scaffolding company has offered Graham a full-time job, lifts to and from work and to cover the cost of his safe pass training. The local company said they did not need any praise and it was the least they could do.

Graham, Dean and Declan have become good friends over the last two weeks, giving him a place to shower and sleep as often as they can and now helping him manage the funds that have been raised.

Dean set up the GoFundMe which has raised €2,070 in two days.

“We just said we would chance it and see how it goes. We didn’t think it would take off like that but since we started it now he has had a full-time job offer. A woman text us yesterday and said she is going to hire him and pay him a full week’s wages and his safe pass courses, the response has been unnatural.

“They are going to hire him and let him work for the first few weeks until the body gets used to it they are giving him a break to come in for a few hours every day and get used to what they are doing they are going to pay for his safe pass course and everything.

Dean and Declan have set up an online bank account for Graham and they have come to an agreement to manage the money that has been raised to pay for his rent. A landlord has offered him a one-bedroom flat to live in.

“His first reaction was unbelievable we went over to him the day after we set up the fundraiser and it was €1,100 at the time and he nearly broke down he couldn't get over how generous people were and helpful and his life is finally coming together he is delighted with himself.

“I am a bit overwhelmed too, to be honest, I wasn't expecting anything out of it. I was doing it because everyone has been down in the dumps so it was just trying to give him a dig out and the reaction it is getting is unbelievable so many people are donating I am delighted to help him out.

“We are after setting him up with a Revolut account so the way it works with GoFundme you withdraw it onto your card but he is after coming to an agreement with us because he said he has never had that much money on him before and he doesn't know what way it works with rent. Myself and Declan are going to set up everything with the landlord for him and set up direct debits so the money will go straight towards his rent.

“We were in contact with a landlord and he says he has a small one-bedroom flat and he is doing it up at the minute but it will be ready in the next two weeks and he said he will happily have him live in there. The company that said they are going to hire him said they will get him a lift to and from work every day until he gets back on his feet,” he said.

Dean said he wanted to do more than give him food to help him move forward.

“I just went over to him one night after work I had seen him there for one or two nights before that I saw he looked about the same age as myself so I said I would get him food and go over to him. I went over with food and the first thing he said was 'do you want some?' so I thought that was really generous for a lad that doesn’t really have anything.

“We just had a general chat for an hour or that and I got to know him from that and he seemed like a nice guy from first impressions so I said I would give him a chance and try to get to know him.

“It didn’t look like he was getting much help in regard to actually moving forward. People were giving him food and that but there’s only so much food you can eat it’s not exactly going to set you up for the future so I was thinking he needs something that can get him back on his feet.

“It was just myself and my friend the first few days starting it off he came to either of our houses he had a shower and that and we got to know him as a person,” he said.

It was only by chance that Graham ended up in Portlaoise and the local people have rallied to get him back on his feet.

“He is originally from Belfast, he grew up in foster care until 18 and he had to fend for himself then. He ended up on the streets in Dublin he was robbed in Dublin he realised he had enough of it he was being constantly abused by people on the streets who were looking for money for drugs.

“He was supposed to go to Kildare, he got some money off a woman for a train ticket she offered to buy, he fell asleep on the train and ended up in Portlaoise so it was by pure chance he ended up here and he is delighted that he did,” Dean said.