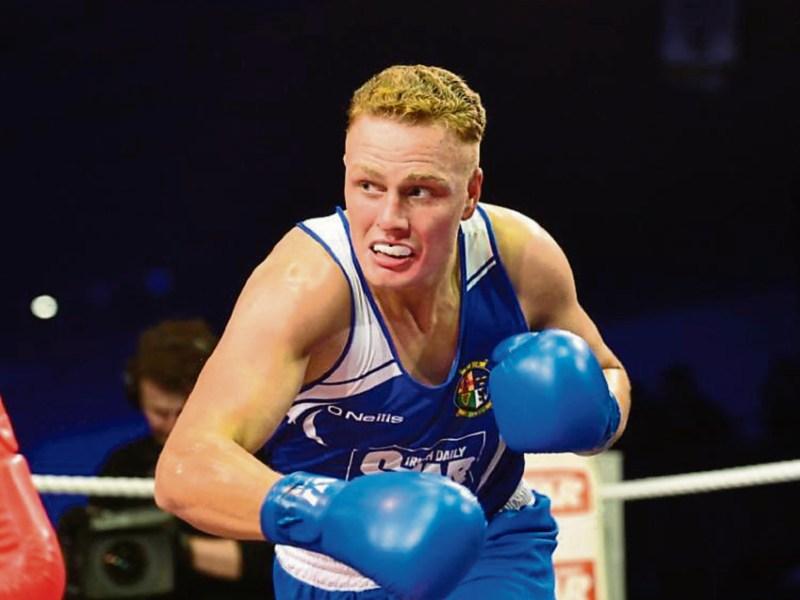 An international boxer from Portlaoise who, along with two other men, robbed a phone and money from a Good Samaritan who had given them a lift, before they bundled the assaulted man into the back of his own car and took the vehicle for a drive around Laois, has been given a five-year sentence.

Garda Sharon O’Donnell gave evidence, along with State prosecutor, Mr Will Fennelly, that on June 3, 2016, the injured party reported that his car had been stolen and driven away at speed, The car was observed by gardaí on the Mountrath Road and it took off at speed on the wrong side of the road, almost crashing three times.

The car was being driven by the brother of the accused and he absconded when the car finally stopped.

The injured party had been out in Castletown when he was approached by three men, the accused, the accused’s brother and a third man. He gave the three men a lift to Portlaoise where they went to an off-licence on the Mountmellick Road. After this, they parked up at Fairgreen, where the three men robbed the injured party of his phone and money and one of the men grabbed the car keys. The injured party challenged them and was assaulted by being punched, before he was put into a headlock and choked until he gave them the PIN to his phone.

Garda O’Donnell said that at one point the injured party couldn’t breath and thought he was going to die.

The three men then took the car to drive around Laois. They got to Castletown, where one of the men got into a van parked there and proceeded to follow the stolen car at speed. The injured party was quite frightened by the way his car was being driven and tried to jump out of the vehicle, but the car kept speeding up.

Mr Fennelly said that the men were “having jollies” in the injured party’s car, doing handbrake turns.

Eventually the injured party was able to persuade the men to go to Lakeglen, where he managed to get out of the vehicle and alert the neighbours. The car then drove off, leaving the injured party pretty shaken up and disoriented.

The court heard that the accused, Bernard O’Reilly, was the one who assaulted the injured party, took his phone and drove the car.

When arrested, the accused made no comment throughout garda interview.

Mr Fennelly said that one of the other males involved in the offence was dealt with by the Garda Juvenile Liaison Officer, while the third was never identified.

The accused had a number of previous convictions, including 26 road traffic matters, ten public order offences, possession of a knife, thefts and drug offences.

Garda O’Donnell said that the injured party is still shaken up and in fear from the incident.

In a victim impact statement, he said: “Not a day passes where I’m not reminded of it, I was only 18 at the time.”

He said he suffered a black eye and cuts to his head and behind his ears. He said he had felt completely defenceless and numb with fear on the day, and when he was being choked he thought he was going to die.

He suffered horrific nightmares for weeks after and wished “the memory could be removed from my mind”.

“I thought I was going to die that night,” he said. “(My family) said I was lucky to be alive and I believe them.”

He went on to say that his family worry about him when he leaves the house, as his parents could have lost their only son.

He had to sell his car after the incident, which was deeply upsetting as it had been his first car which he had used his savings to buy.

“I count myself lucky to have walked away in the way I did,” he said.

Defence for the accused, Mr Colm Hennessy said that this must have been a shocking and terrible ordeal for the injured party, which must have had a profound effect on him.

Mr Hennessy said that the accused’s whole life had revolved around boxing, but then drugs took a catastrophic effect on him. The accused had competed internationally, but then he broke his leg.

The accused had been in custody on other matters and the court heard he was assaulted in prison, ending up in hospital on one occasion.

Mr Hennessy said the accused had €1,000 compensation in court.

In sentencing, Judge Keenan Johnson noted that CCTV and forensics had linked the accused to the stolen car and the accused had made no comment to the gardaí.

The judge said this was “a violent, nasty offence which had a profound effect on the victim”, who he described as a Good Samaritan.

The judge imposed a five-year sentence, backdated to the date the accused went into custody, and suspended the final two years on condition the accused entered into a peace bond for ten years; he remains under probation supervision for 18 months; he remains drug and alcohol free; he has no contact with the injured party or the man’s family; and pay €1,000 compensation