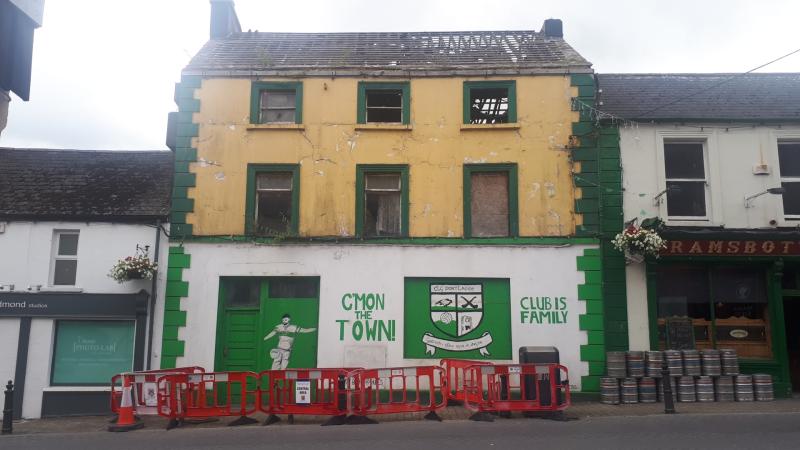 The former county hotel in Portlaoise

A derelict hotel recently bought by Laois County Council is to get scaffolding and a pedestrian walkway.
The former county hotel on the Main Street in Portlaoise has lain idle since it closed 25 years ago.
The council's plan is to have it converted into apartments for social housing tenants.
The derelict building was damaged by several fires and a flood over the years, with the roof broken open.
A mural by CBS students supporting Portlaoise GAA is its only saving grace.
Pedestrian barricades were erected on the footpath by the council this summer to prevent pedestrians from walking past the hotel.
Asked if protection from falling debris was the reason, the council's Housing Officer Michael Rainey said that the scaffolding is a “precaution”.
“As a precaution, the Council has contracted a scaffolding company to erect a walkway to facilitate safe pedestrian passage past the building,” Mr Rainey said.
The building was bought from the owner who lives in the UK, last January after long drawn out negotiations.
That deal began in 2017 with the council first considered forcing a compulsory purchase.
Laois County Council has repeatedly refused to divulge how much it paid for the building, saying that this is “deemed the personal information of the vendor”.
The council expected to have appointed a contractor by July 31. The scaffold is to be erected by the end of August, it was reported at the July council meeting.
The plan for the building is to renovate and convert it into 11 apartments of one to two bedrooms, with tenants to be chosen from the council's housing waiting list.
Cluid Housing Association is taking on the work, and has prepared preliminary designs, not yet made public.
Cluid is now preparing a CAS application for funding to submit to the Department.