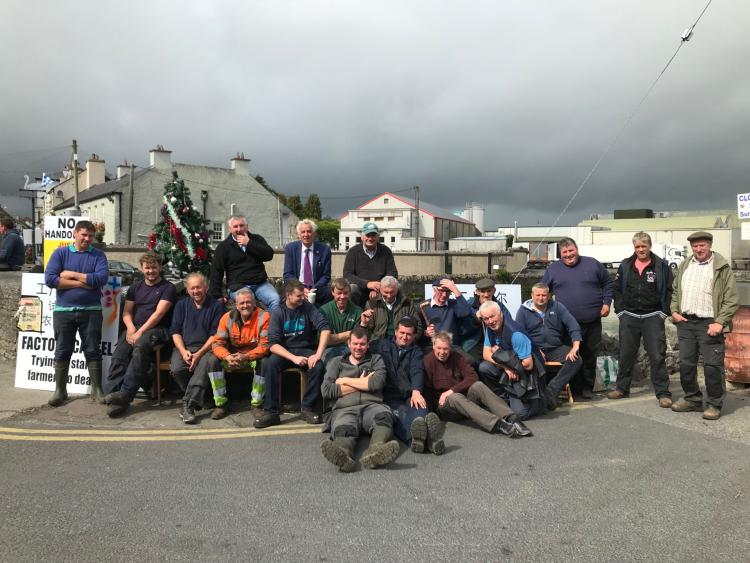 Farmers protesting at a Laois meat factory over beef prices have been served with committal orders that mean if they do not leave the picket line they face being arrested and going to prison.

Dawn Meats management served High Court injunction notices at the farmer's feet as they were on the picket line on Tuesday. The farmers refused to look at them or touch them as they littered the ground. They were left blowing around the street and they continued their protest today.

Six or seven gardaí arrived at the scene of Meadow Meats factory in Rathdowney after 5 pm on Tuesday evening and served the committal orders.

A protestor told the Leinster Express that up to six committal orders were served and there was a couple more for people who were not there at the time.

He said that ‘three older lads in their late 60s or early 70s got them and they are adamant that they would rather go to jail’.

“Arrests could be this Thursday or Friday and it will come to that, they won't lie back. If it does go ahead it will be the first time farmers go to jail for protesting since the 60’s,” he said.

The source said that one or two younger protestors were served with committal orders and they are encouraging them to leave the picket and not go to prison.

The High Court injunction orders that those named on the notice or anyone acting with them “be permanently restrained from impeding, obstructing, hindering or in any way interfering, directly or indirectly, with access to or egress” at the Dawn Meats premises at Grannagh, Co Waterford, Meadow Meats, Rathdowney, Co Laois, Ballyhaunis, Co Mayo, Charleville Co Cork and Slane Co Meath.

It also orders those named or acting with them “be permanently restrained from engaging in conduct that is intimidating or abusive” of Dawn Meat Company or its servants or visitors.

Part of the injunction notice says that any of the named parties or those involved with them neglect to obey it “you will be liable to process of execution including imprisonment for the purpose of compelling you to obey the same Order”.

The protesting farmers ignored these notices and said that they are not part of the Beef Plan Movement. Arrests could be made this week if those issued with committal orders do not leave the picket line.