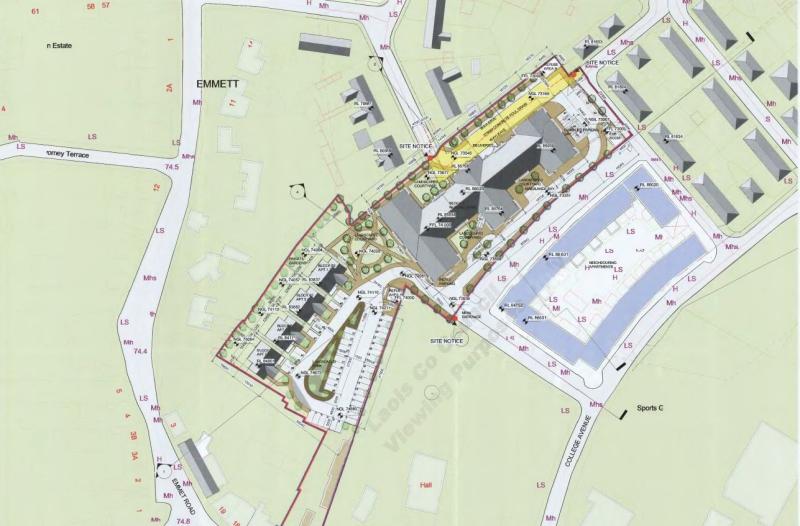 A plan to build a new nursing home in Mountmellick town centre has been put on hold.

Three submissions from residents were received about the application.

“We already have a problem with water quality in Mountmellick. The extra consumption especially for a nursing home ie baths, showers, cooking and cleaning, would put a strain on the already overused drainage system, which caused parts of College Avenue to flood in November 2017,” they claimed.

The couple are concerned too at increased traffic into their estate.

“As it is the roads are hardly sufficient for parking. With an extra 70 or so bedrooms, that would be an extra possible 70 cars by visitors, not accounting for employees. According to the plans there is inadequate parking,” they said.

Plans to store bins on site will impact on the lives of Emmett Terrace and College Avenue residents they said. The couple also said that College Avenue children will lose a play area which is part of the lands to be developed.

“Though we understand the need for such a facility, which would probably employ locals, the scale of the development is too big for the size of the land. It would benefit from being built elsewhere, on the outskirts of the town,” they said.

Mr Maher has asked that this wall be built three metres to maintain security. He also asked that it be finished with a facade that does not detract from the aesthetics or value of his house.

Paul Dempsey from Davin Park said that whilst in principal he welcomes the development, his home is overlooked by it.

“When I built my house one of the planning conditions was that I could not install gable end windows over looking this site (which was farmland at the time). I duly complied and all I am asking now is that this same condition apply to this section in Block A of this building," he said.

"The section is overlooking the rear of my property where I have developed at a significant cost a small but private safe and secure amenity/play area for my family and in particular my grandchildren and as such I believe this development will have a significant negative impact from a privacy a visual and a quality of life perspective on my family.

"I request that an alternative design be requested off the developer to eliminate or minimise the impact on my property and family,” Mr Dempsey said.

The development would be the first private nursing home in Mountmellick, which has the HSE’s St Vincent’s Community Nursing Unit.

A decision was initially due by next Wednesday September 18.