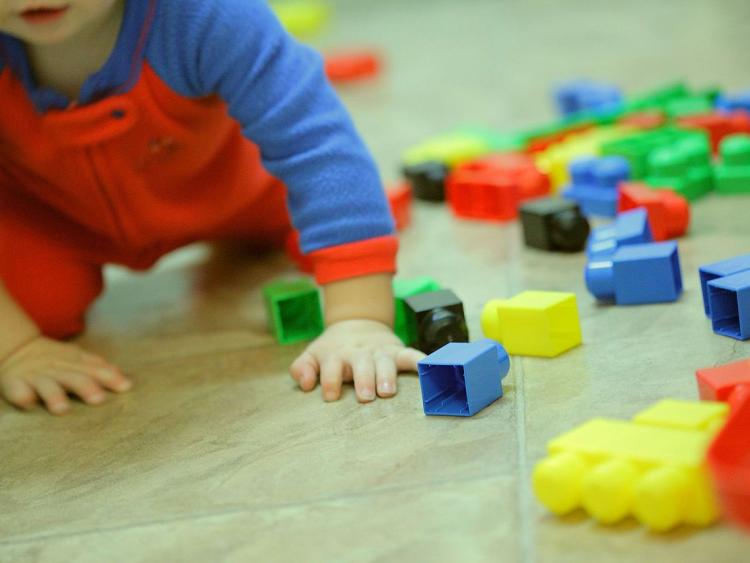 The average cost of full-time childcare in Laois is more than €160 a week according to new official figures which also reveal working parents of infants could be shelling out up to €9,000 a year to have their children cared for.

The childcare charges have been published by the Minister for Children and Youth Affairs, Dr Katherine Zappone, in new data on the cost of early learning and care and school-age childcare to families across Ireland.

The survey of 4,000 childcare reveals that the average fee for full-time childcare now stands at €184 per week - an increase of 3.6% since last year.

The survey also breaks down the costs by age group.

Full-time care for infants is the most expensive. They cost €174.73 a week on average. This would leave parents with an annual bill of some €9,000 for 52 weeks. Part-time care for babies and children under 1 costs on average €122 a week Sessional care for the same age group costs €83.18.

The cost for children aged 6 and over for full-time care drops to €159.95 a week on average. The part-time care weekly fee falls to an average €107.37 for the older children. Sessional care for the oldest age category rises to €76.06 a week. 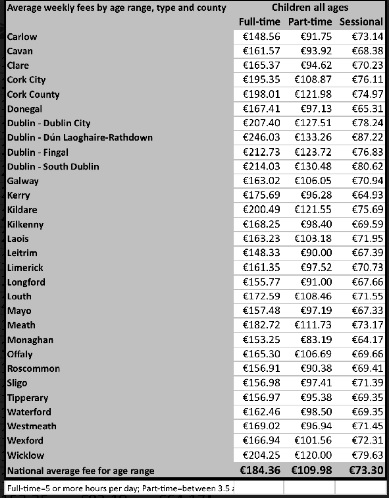 A statement said the publication of this information seeks to provide parents with information on the average cost for early learning and care and school-age childcare in their local area according to their child’s age. The Department said it highlights major variations across the country.

It said the publication coincides with final preparations for the introduction of the landmark National Childcare Scheme (NCS). The Department said this will introduce considerable enhancements to State-supported early learning and care and school-age childcare from later this year.

Speaking about the data being published today, Minister Zappone said:

“A key priority for me as Minister for Children and Youth Affairs is to reduce the cost of high-quality early learning and care and school-age childcare to parents and bring it into line with EU norms.

“Despite record investment in early learning and care and school-age childcare – with 117% increase in investment over the past four consecutive Budgets – the cost to families of early learning and care and school-age childcare remains higher in Ireland than in other OECD countries – with wide variation in fees across the country. Staff costs account, on average, for approximately 70% of services’ costs. We know that the average hourly rate for staff in the sector is just over €12.55 and the average hourly rate for Early Years Assistant is €11.44.

"As the State is not the employer, my Department does not pay the wages of staff working in early learning and care settings. A Labour Court Sectoral Employment Order (SEO) is the most viable mechanism to improve pay and conditions. I have repeatedly expressed support for an SEO and my Department is ready to co-operate with such a process when it is under way.  I have engaged and will continue to engage with SIPTU on this issue.

“The introduction of the National Childcare Scheme will add to supports provided to parents over the last four years, for example, the second year of the preschool scheme, and targeted subsidies of up to €145 per child per week.  It will alleviate the burden on parents further, but more needs to be done. Efforts to address affordability will continue. This will be backed by the Government pledge, set out in the First 5 Strategy, to at least double the investment in early learning and care and school-age childcare by 2028.

“I recently announced plans to develop a new Funding Model for early learning and care and school-age childcare. This Funding Model will be a critical mechanism to ensure that the State leverages maximum value from that additional investment. As Minister, I want to see improvements in terms of affordability for parents and the quality of service offered to children.  This is highly dependent on a valued workforce. As part of its work, the Funding Model Expert Group will explore mechanisms to control the fees charged to parents, recognising that at present my Department has no powers to do this.

“In the meantime, I urge parents to use this data to inform themselves of what they should expect to pay for early learning and care and school-age childcare in their area, and to check out www.ncs.gov.ie to see what subsidy they may be eligible for under the National Childcare Scheme,” she said.