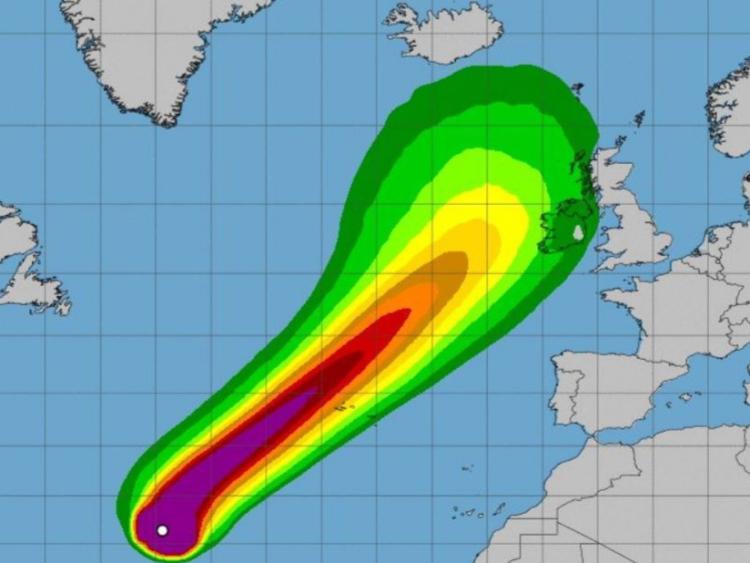 Hurricane Lorenzo is currently located over the Atlantic Ocean

Local authorities have been instructed to activate its crisis management procedures ahead of the expected arrival of Hurricane Lorenzo towards the end of the week.

While the path of Hurricane Lorenzo remains unclear, local authorities and other agencies across the country have been directed to monitor events over the coming days.

The National Directorate for Fire and Emergency Management (NDFEM) along with Met Éireann have been monitoring the track of the storm.

Met Éireann has also been working with the US National Hurricane Centre, the EU and the UK Met Offices.

"The national picture is for winds to pick up ‪on Wednesday evening, with rainfall and wind continuing throughout Thursday and into ‪Friday morning," said Minister Eoghan Murphy in a statement which was issued this Monday night.

The statement adds that the OPW has confirmed that high seas and potential storm surges may occur along the coast as this system approaches Ireland.

"We have contacted all local authorities, requesting that they monitor Met Éireann’s forecasts, and prepare for storm impacts by activating Crisis Management and Local Co-ordination arrangements," stated Mr Murphy.

The NDFEM says it will decide on Tuesday morning, based on the updated Met Éireann forecast, if further co-ordination is required, up to convening a National Emergency Co-ordination Group (NECG) meeting.

"I will do so only if I am advised it is necessary. Given the uncertainty associated with the track and evolution of Hurricane Lorenzo we have requested all Departments to have staff on standby who are available to attend NECG at short notice,” said Mr Murphy.