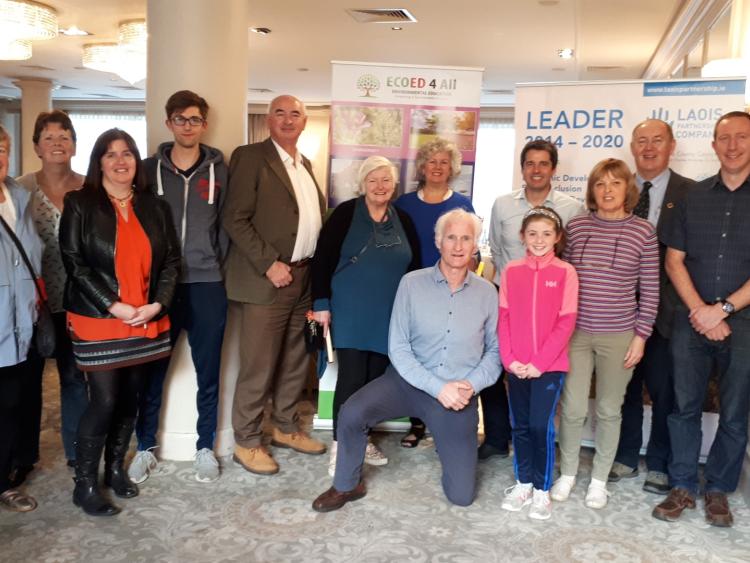 Duncan Stewart with experts and some of the audience at the first climate action public meeting in Laois.

Cutting carbon emissions in Laois could be done by making rural roads one-way with cycle lanes, subsidising train fares and offering free carpooling carparks.
RTÉ Eco Eye presenter Duncan Stewart led the workshop in the Killeshin Hotel in Portlaoise on September 30.
He described a shocking future unless drastic carbon cuts are made, with millions of climate refugees leaving huge regions of the world made uninhabitable.
“In Ireland we are now double the European average, our greenhouse gas emissions have not gone down here like they have in Europe by 25%, they have gone up by 12%. We are completely out of line,” said Mr Stewart.
He claimed that Irish people produce twice as much carbon per person as Chinese people, while burning turf is worse than coal for releasing CO2, with 90% of heat from an open fire going up the chimney.
Prof Micheal O'Cinneide noted that Laois has grown from 58k to 84k people in 20 years, but 10,000 drive to Dublin daily, emitting 100,000 tonnes of CO2 per year. There are a quarter of a million cattle in Laois also releasing high emissions.
The audience were asked for their ideas.
Abbeyleix Tidy Towns member Mary White said that big one-off rural houses are a huge producer of emissions.
“We should be telling young people that they will not be able to have their dream house 2,500 or 3,000 square feet in the country. With every trip into town you have to use a car,” she said.
Parent Nadine Sheridan from Portarlington said that she lives just outside town but with no path or cycle lane, she has to do three school runs a day.
“I’m in half an hour of congestion every day,” she said.
She noted that just one unsafe junction puts parents off sending their children on bikes to school.
Laois County Council CEO John Mulholland said they need more funding for bike lanes and that rural roads do not lend themselves to bike lanes.
Farmer John Joe Dunne suggested making some local roads one-way to make space.
To make commuting less damaging, the audience suggested subsidised train tickets, free parking for carpoolers, free bike lockups and an electric bike-to-work scheme.
On making houses energy efficient, they agreed that a trustworthy independent agency is needed to advise on the many options. Long term low interest loans were also suggested.
Farmers want grants for growing trees to continue after 15 years, with replanting grants, and a carbon offset on trees growing on a farm.
Energy expert Noel Gavigan showed how other countries are energy efficient, with district heating for urban communities, and anaerobic digesters on farms and even in schools turning food and slurry into biogas and heat.
Laois County Council CEO John Mulholland said that Portlaoise is the only town in the Government’s 2040 climate plan, set to be the first low carbon town.
“We have to make sure we follow up on that. We are going to ascertain what is the carbon footprint of Portlaoise people over the next number of months. 25% of the (Laois) population is in Portlaoise. We must see how to make a conscious effort to bring it to the top of awareness for people. We have schemes such as the southern circular road where we will have biodiversity planting,” he said.
More workshops will follow over the coming weeks, funded by Laois Partnership.
“It is up to citizens to make this happen. We want Laois to be a model that can be repeated all over Ireland. I want hundreds of farmers, schoolkids and householders to come to these workshops,” Duncan Stewart said.
The first is for farmers on sustainable alternatives to cattle, in Mountrath’s Bloom HQ in the old convent on Friday October 11 at 6.30pm. More are on transport and cycling, energy refits for houses, biodiversity and training. See www.ecoed4all