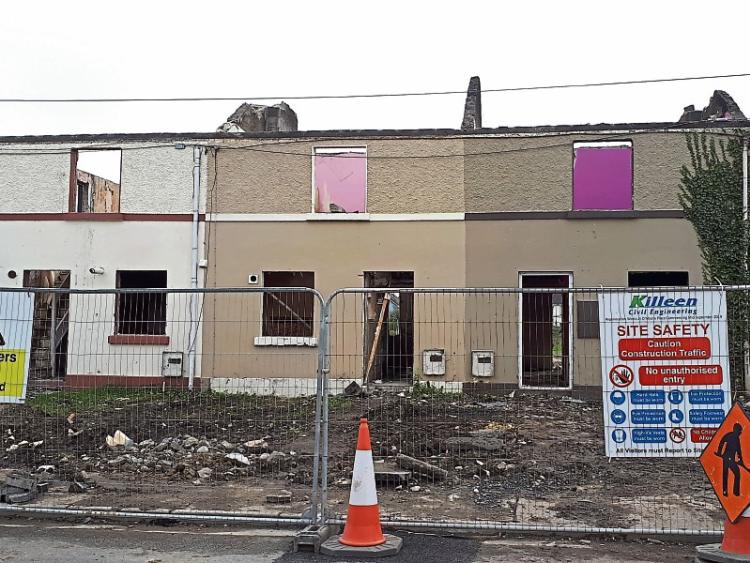 Now you see them... some of the six houses in O'Moore Place Portlaoise to be knocked this week

Demolition of some derelict houses in the oldest council built estate in Portlaoise has begun.

Six houses in O’Moore Place on the Mountmellick road will be razed to the ground this week, as part of an extensive regeneration of the council built estate.

The roofs and electrics were removed from the homes by a contractor last week in preparation for machines to knock the buildings.

Contractors for Laois County Council expect to have the 70 year old derelict houses knocked in a matter of hours, this Tuesday or Wednesday October 15 and 16.

The houses will be replaced by new carparking spaces, footpaths and a turning area for emergency vehicles for easier access to the narrow cul de sac estate. The works will cost €400,000.

In the next part of the plan, a field adjoining O'Moore Place is to get 34 new social houses, funded under the Urban Regeneration Programme.

The field has in the past been a target for anti-social behaviour.

However a title issue over the land has put the housing plan on pause in recent months.

An update was given at the September council meeting.

“Co-operative Housing has completed the heads of Agreement with the owner of the adjoining field; however there is a title issue that remains to be resolved before we can advance the development of voluntary housing on the site,” the council said.

Cllr Caroline Dwane Stanley had harsh words for the state of repair of the estate where she herself grew up.

‘I don’t think there is another estate in the county in such a bad state of repair. It is the duty of the council, the Gardaí and the residents to get on top of the problem,” she said.

“I ask that the executive invest as much money as possible, there are genuine law abiding people trying to raise children there. It’s chaotic what’s going on there,” she said.

“This is a considerable investment. It’s €400,000 of a contract. We’ll continue to invest in the area and we will continue to acquire houses when they become vacant.

“At least half of the houses are in private ownership, we are not the only landlord. Our aim is always to remove any vacant or derelict houses and that in itself helps solve problems,” the Housing Director said.