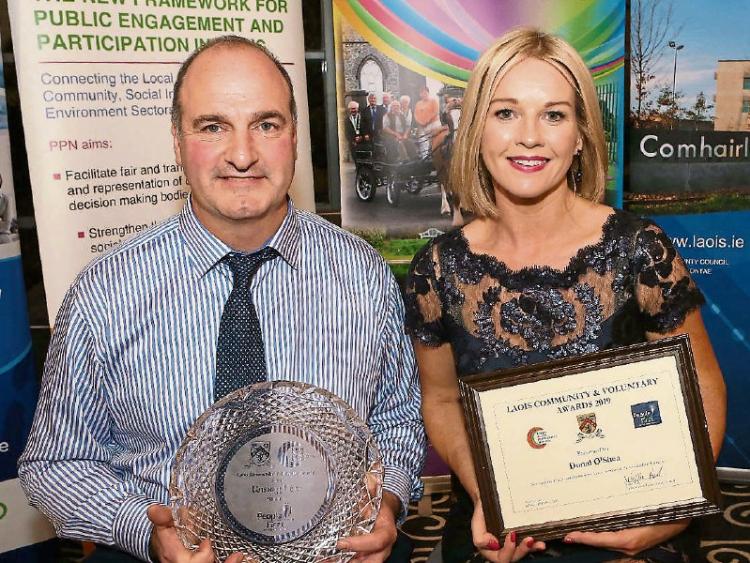 The biggest award announced at the 2019 Laois County Council Laois Community and Voluntary Awards was the Unsung Hero award.

This year at the awards in the Midlands Park Hotel on Friday October 18 there were 23 deserving nominees from all around Laois.

The winner to great applause was Dónal Ó Shea from Stradbally.

He is also chairperson of the Stradbally Community Development Association, and is a social inclusion representative on the Laois PPN Secretariat . Through that latter role he contributes to the Disability Special interest Group.

The MC Claire Byrne read out a citation in praise of his work.

“The winner is involved in many community groups and initiatives that have developed community infrastructure, increased local capacity, benefited health & wellbeing in the community and supported the environment.

“The projects he has been involved with have impacted positively on a large cross section of society from young to old and everyone in between.

“While working hard at local level the winner has also contributed significantly at regional and national level to promote understanding and inclusion for people with disabilities and those struggling with poor mental health.

"Its nice to get an award but for me it's not about that, it's the causes and the people that motivates me," he said.

A Kerry native living in Stradbally since 2005, Dónal thanked his family for their support, and dedicates his award to his daughter Amy aged 10.

"She has made many sacrifices over the years to allow me attend numerous meetings," Dónal told the Leinster Express.

His interest in promoting better disability access stems from his own physical health difficulties.

"I have rheumatoid arthritis and ankylosing spondylitis. It's torture, I'm unable to work because if it. But I hope getting this award shows that having a disability does not mean that one is incapacitated," he said.

Dónal is passionate about improving access for people with disabilities to help them be as independent as possible, not just in Laois but right around Ireland.

“I am well aware that this is a considerable challenge for many affected by disability,” he said.

The report calls for access to buildings and public places as well as access to work, with input and agreement from The Disability Federation of Ireland.

“The person with a disability is considered 'to be a wholesome' individual in their own right. Therefore the onus is on the local authority and the State to ensure that the infrastructure, lifts, public toilets, ramps etc are in place to facilitate needs,” Dónal said.

“The same onus is to ensure that the provisions and opportunities are in place to allow people with disabilities to lead as independent a life as possible,” he said.

“Thirdly, to educate the public. Attitudes are important in assisting this sector aquire equality,” he said.

A European Economic and Social committee visits Ireland on October 23 and 24 to meet Disabilityreps.

“This is a huge opportunity to put the infrastructure in place. My desire and efforts to continue in employment have been made so difficult through the absence of the above culture,” Dónal said.

Supporting Dónal on the night were his girlfriend Nicola Griffin and members of the Round Tower Soccer Club and the SCDA.

Runner Up Unsung Hero Award went to Maureen Bradley who has worked for 42 years at the Daredevil’s Foroige Club. Laois County Council's citation for her read as follows.

“This lady has been volunteering in the community for many years and has supported the work of many clubs. She has contributed to local groups and clubs as well as having a strong presence across the county.

“She has been a champion and a role model for young people supporting them to grow, develop and reach their potential. She has created a great legacy by inspiring young people to continue her work in the community.”

The Laois County Council Community and Voluntary Awards are held in association with Laois Public Participation Network and were sponsored by People First Credit Union. The awards are supported by the Leinster Express as media partner.