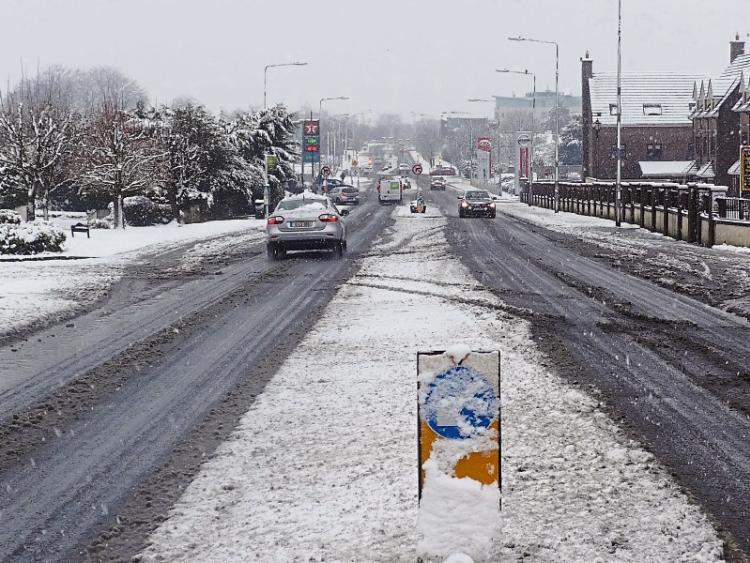 A snowy Dublin road in Portlaoise in 2017. Pic: Conor Ganly

Frosty nights are back and so too is Laois County Council’s winter maintenance programme of gritting roads which the council admits is limited by resources.

About a quarter of roads in Laois are treated. These include main routes between towns, urban routes in Portlaoise, Portarlington and Mountmellick. The motorways managed by Transport Infrastructure Ireland.

Just three local roads are included including the road to Heywood College. They are a lower priority and depend on funds.

The council has expanded its route by three roads. The new road in Portlaoise linking the Abbeyleix and Timahoe roads is added. It is due to open on November 1.

Also added is the L2112 local road from Portlaoise to Ballyfin, and the R421 from Coolagh Cross to the Offaly border where Offaly gritters take over the road.

“The objective is to keep the routes free from snow and ice 24 seven. That doesn't reduce the obligation on motorists to drive carefully. No driver should assume a road is treated,” he said.

Mr Walton said no more roads can be added because machines and staff are limited.

“Laois County Council is at the limits of both available human and transport resources. With no additional resources, the capacity for additional routes/areas to be added can only be considered where other routes are removed from the treatment roster,” he told the Leinster Express after the October meeting.

“Last winter was particularly mild and the number of treatments was 38. In the main, costs are reimbursed to the Council from the Department of Transport and Transport Infrastructure Ireland. The question of unspent monies carrying over to subsequent years does not arise as the costs are reimbursed on a costs incurred basis,” he said.

Councillors called for roads to schools to be added to the rota including to Heywood College, The Heath NS, Killeshin NS and Knockbeg College.

The Cathaoirleach Cllr Willie Aird welcomed the stretch to Ballyfin.

“(It was) a disgrace you couldn't get to it last year. I don't see the roundabout to the Heath School there. I put in a request so I would not be embarrassed again. It's only a small stretch,” he said.

Cllr Ben Brennan brought up the two roads used by schoolbuses in his area of Killeshin and Rossmore in east Laois.

“I've been harping on about it for years, there is a schoolbus with 56 children. Has something to happen? Children are living in fear coming down there.

“Parents are on to me the whole time. The road to Knockbeg the same. It's falling on deaf ears. When there's an accident it's too late then,” he said.

Other councillors each requested roads to be added in their own areas.

Cllr John Joe Fennelly wants the road from Ballypickas to Heywood Community School.
“I saw a bus coming sideways on that road, and on Ballyroan to Abbeyleix as far as the national school, cars can't get up that hill,” he said.

“Local schools should be prioritised. And there are 12,000 commuters who have to get to the motorways or the train station, we need more funding,” said Cllr Tom Mulhall. He asked for money leftover from the last mild winter.

Cllr Aisling Moran asked about the Barrowhouse to Ballylinan, Killeen to Sleaty, Killeen to Maganey and Stradbally to Ballickmoyler roads. Cllr Conor Bergin wants the road to Ballybrophy train station to be gritted.

Cllr Ollie Clooney wants the Swan Hill included.
“A man there has 40 lorries, he has to get them towed up the hill, it's awful steep,” he said.

Cllr John Joe Fennelly asked that supplies of grit be again left in depots for the public to take.

Cllr John King asked for people who previously voluntarily cleared snow to be added to a list for paid work this winter.