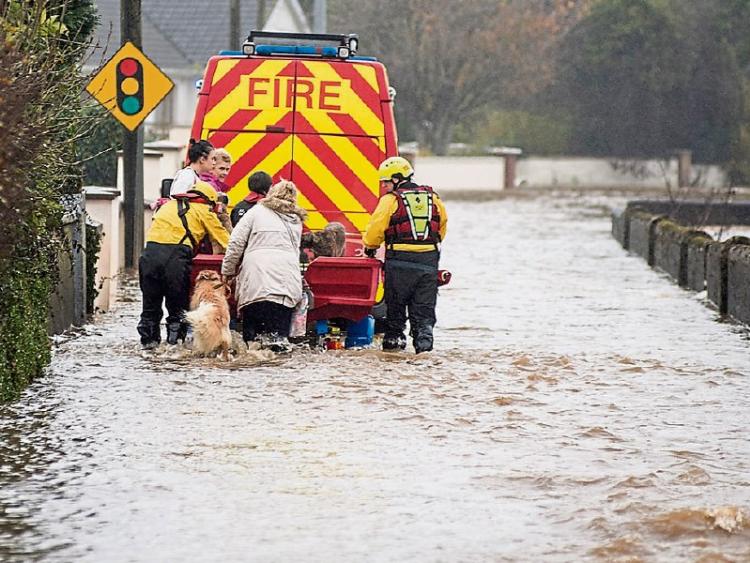 Laois Fire and Rescue Service evacuating residents from the Manor Road to the safety of Mountmellick Picture: Kevin Byrne

Nearly two years after the deluge, flood victims and others with views on how to protect Mountmellick from flooding are to be consulted this week on new defences for the town.

Laois County Council says this week's meeting will be open to all residents, businesses and other interested parties.

The community will be invited to share their experiences of the flooding of November 22, 2017 which caused extensive damage to homes, businesses and other buildings.

The council says people will be able to discuss what happened and bring evidence such as photos and videos of what went on.

County Hall invites the public to also give their opinions on options for a flood relief scheme to the flood relief project team.

The council, along with project partners the OPW (Office of Public Works), signed a contract this year with the JB Barry team to assess, develop and design a flood relief scheme.

County Hall says the design work is set to be the most time consuming part of the project.

The consultants have been tasked with reviewing existing OPW proposals which were drawn up before 2017.

The council confirmed to the Leinster Express that a new scheme will differ in cost and design to the original OPW plan.

The council says the OPW's costing of €3.2 million is 'innaccurate' as it is out of date. It adds that it will be at least two more years before the contract is tendered.

The OPW plan cannot be used as parts of Mountmellick that flooded in 2017 were not identified as being at risk in the so-called Catchment Flood Risk Assessment and Management (CFRAM) study which commenced in June 2011. Flood plans were published in 2017.

A revsied plan has to be carried out as part of the new flood relief scheme.

The public engagement day takes place on Wednesday, November 13 from 3pm to 8pm in the Mountmellick Development Association in Irishtown.