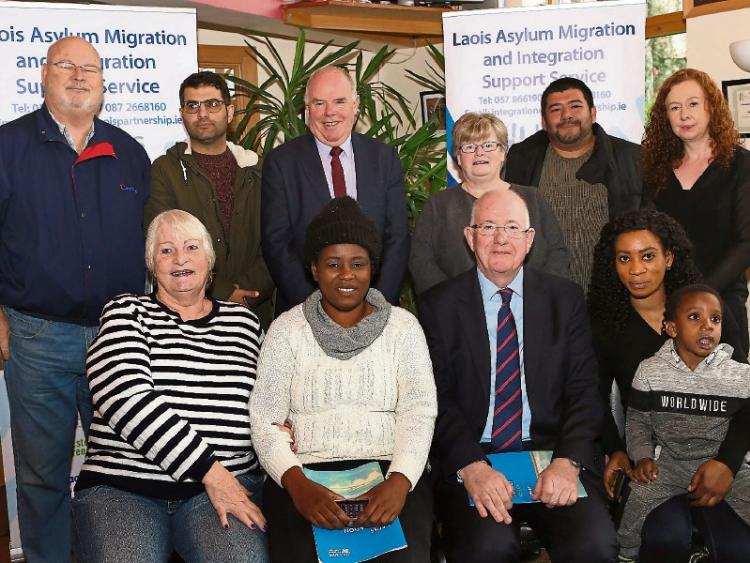 Employment is the most important factor in the effective integration of the many thousands of non-Irish people in Laois and finding work remains a significant factor for the often well educated non-Irish people who have moved to Laois.

The finding is contained in the new Laois Integration Strategy which reveals that while the county is home to people from nearly 100 nations, 40 per cent of the people who have moved here have experienced racism.

The Strategy was launched recently in Portlaoise by Minister for Justice, Charlie Flanagan.

The authors say the plan's mission is to work in partnership to identify, address, coordinate and deliver a range of support services and community initiatives that will promote and facilitate integration in Laois.

“The diversity of the population has contributed to the economic, social and cultural life of Laois for decades, helping to create and strengthen a vibrant, inclusive and creative Laois community,” said the Laois Partnership commissioned report.

The report identifies a number of “strategic goals”.

One of these is to work with individuals, services and employers to promote and support enterprise creation, development and “pathways to employment”.

“Employment is arguably the most important factor with regard to effective long-term integration outcomes and an integrated workforce can bring benefits for the target group, the wider community and local economy,” says the plan.

However, obstacles are identified.

“Unemployment remains a challenge in Laois and the broader Midlands Region, which has reportedly experienced a higher rate of job loss than any other region in Ireland. 80% of people with non-Irish nationality who live in Laois are of working age and almost 40% of people have third-level qualifications. Despite the high level of education and the proportion of people of working age, employment remains a significant challenge for people with non-Irish nationality in Laois specifically,” says the Strategy.

The Strategy also identifies languages as a goal. The aim is to identify and address English language and education needs through “consultation, access to information, and the coordinated delivery of targeted and mainstream supports”. The plan says language skills are widely considered to be a precondition for integration and one of the most essential aspects of integration efforts.

The third strategic goal involves social inclusion. The aim is to improve the standard of living, health and wellbeing through the provision of accessible information, targeted support and building capacity of mainstream services.

The Strategy says the most common challenge raised when it comes to social inclusion was access to housing, followed by access to information on general and specialised immigration-related issues.

Another goal is creating and facilitating opportunities for dialogue, inclusion, representation and leadership to strengthen intercultural relations and increase participation in the community. Racism is discussed.

“The public perception of racism varied widely across nationalities and individual responses. The experience of racism and prejudice in Laois was expressed via the survey, with almost 40% of people indicating that they had experienced or witnessed racism or discrimination in Laois. Negative attitudes and prejudice exist and it was considered that these attitudes can have a lasting impact on the ability and motivation to participate in the community in Laois and in particular on establishing friendships and interpersonal relationships with residents in the county," said the strategy.