IT'S JUST A PHASE: It's beginning to look a lot like Christmas 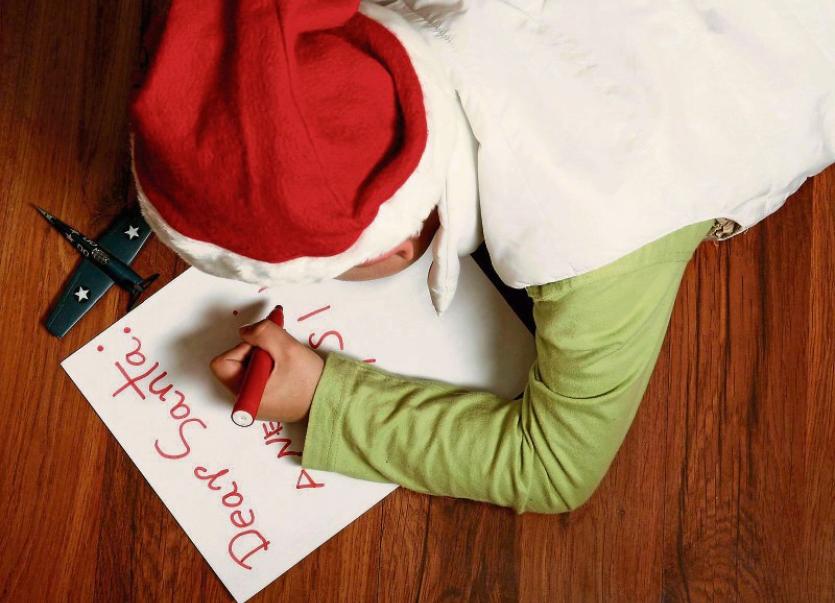 Is it okay to talk about Christmas now? We are nearing the end of November after all. It’s more the Santa list I want to talk about. Have your kids their letters ready? Do they know what they want?

My pair started to compile their lists this week due mainly to the fact that Daddy Chambers brought home a toycatalogue.

Personally I wouldn’t have one in the house because the kids are bad enough without a big book of toys to be flicking through!

So do you remember a few weeks back that I wrote about how we, as a household, are attempting to cut down on our waste and our use of single use plastics? And remember how I told you how Aidan was really embracing it?

Yeah, well, he has since changed his tune since the arrival of the Smyths catalogue.

He’s gone from giving out about me using sandwich bags to wanting every last bit of plastic he spots in said catalogue.

The cheaper and most useless looking the better too!

Listen, I don’t blame him; he’s a child after all but wouldn’t it be great if we could just reason with our kids?

Every year is the same with my two. They make a list of toys (or should that be crap), they get most of them and they are then quickly forgotten about.

Take last year for example. Aidan wanted a pair of Heelys, a pair of roller shoes that have two removable wheels embedded in each sole.

He literally begged me to allow him to put them on his Santa list. He’s cute as a button, so how could I say no?!

So out I went and purchased a pair of Heelys with light up soles just to make them even more special.

When Christmas morning arrived he couldn’t believe Santa left them for him and he put them on immediately on unwrapping them. I helped him up on to his two feet (and two wheels) and he instantly freaked out.

He didn’t like the feeling of not being able to use them, of not being in control and that was the first and last time the Heely’s have ever went on his feet. What a bloody waste of money.

His sister isn’t much better. She begged for an electronic interactive toy ice cream cart despite it being for children younger than her. She spotted it in her friend’s house and insisted she loved it and wanted it.

Santa, of course, duly obliged. I’d say she’s played with it all of three times since and now it just sits gathering dust in the playroom.

I’m sure all kids are the same but buying stuff for it never to even get used is a pain in the proverbial.

If I could reason with them, I’d tell Aidan to ask Santa for sports gear, namely jerseys because he is obsessed with wearing them.

I actually tried doing that but he was having none of it. He’s not seven yet so I suppose it’s to be expected.

I also know that Sarah would be totally and utterly content with a shed load of colouring pencils and blank paper.

She spends most of her time drawing and colouring these days but when I suggested putting an art set on her list, she wasn’t on for it.

Instead she wants a toy vacuum cleaner and a toy safe to put her ‘valuables’ in; otherwise known as more plastic sh*te!

Apart from colouring and wearing jerseys, what are my kids in to?

Sticks would be top of the list. They spend their time outside playing with sticks and pretending they are guns or weapons of some sort. I’d hardly get away with suggesting they ask Santa for a few sticks would I?

Indeed just last week the pair of them spent hours on end playing with old cut up pieces of skirting board. It was left over from our house renovation and we now use it for firewood.

My kids, mind you, use them as art materials. They were happy out at the kitchen table drawing on pieces of skirting board and yet they still insist they need all these toys from the toy catalogue.

There’s only one toy that both of them consistently play with and even if they don’t put it on their Santa lists, I’m going to buy more if it for them.

I’m talking about the old reliable Lego. I don’t mean the sets of Lego where you build a specific thing like a helicopter or a police car.

I’m talking about the bog standard classic bricks. The things they make with it are just brilliant.

They are always using their imaginations with Lego so it’s good to know that not all the plastic stuff in the toy catalogue is rubbish that kids tire of quickly.