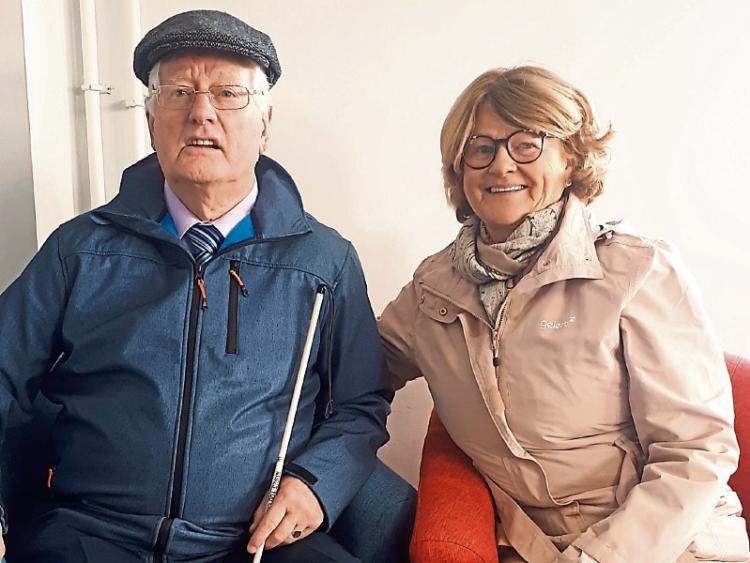 William and Joan Baldwin who are waiting for the HSE to find a home for their adult daughter with disabilities. Photo: Leinster Express

An elderly Laois couple with sight and mobility problems are pleading for full time residential care for their adult child with special needs.

Joan and William Baldwin, aged 75 and 81 respectively, care for their adult daughter Linda at home in Maryborough Village in Portlaoise but they have found it increasingly difficult to cope.

The family are originally from Kildare and moved to Laois about a decade ago.

They say that their daughter Linda, 45, has a moderate to severe mental disability as well as epilepsy and she requires their full attention. The couple have cared for her all their lives.

However with old age and health problems themselves, eight years ago they began asking the HSE to find a residential home for Linda, where she can be well cared for and supported.

William, a retired soldier, is visually impaired to the point that he can only make out shadows and uses a white stick to walk about.

He explained how caring for Linda falls on his wife because of his sight problems.

“Linda takes seizures nearly every second night. My wife has to go to her and give her medicine. She minds the three of us and cooks for us. But Linda needs and wants her constant attention, she calls for her all the time and she is not able for it,” he said.

Joan said that she finds it hard to sleep as she is always on the alert to go to her daughter’s aid.

“I wake and hear her shouting, I don’t sleep soundly. Every minute of the day she asks me when is she going into respite. She is like a small child even though she is 45,” she said.

Their daughter is the second youngest of nine children, four of whom have special needs.

The others are either in residential care, or are independent enough to live in their own homes. Only Linda remains living at home with her parents.

There are no family living in Portlaoise who can give their parents a break from caring for Linda every night.

“We have a constant worry all the time, the pressure is somethime else. It is like looking after the nine of them. It is difficult. She hit me once but she is not violent. I just never get a minute’s peace. I need respite for her badly, I am very tired,” Joan said.

They get a brief daytime rest twice a week when Linda goes to the local Rehab centre on Mondays and on Friday mornings.

They are pleading with the HSE for full time residential care.

“Linda herself would be happier, she would have more friends and more things to do. At home she just looks at the ceiling all day and it’s making her worse,” said William.

“We have been asking the HSE for eight years for residential care. There are plenty of houses around that she could go. They don't even call back any more. We are left in the dark all the time. it's not right,” he said.

Laois Sinn Féin TD Brian Stanley is asking the HSE for residential care for the Baldwin's daughter for more than four years, to no avail.

“The length of time they are waiting is a scandal. They are an elderly couple themselves and are clearly under pressure. The system is completely broken,” he said.

“This is a lovely couple who have been very unfairly treated. They need some help, we have made every effort to try and assist them but all our efforts have just been ignored,” he said.

His office received multiple letters back from the HSE on the issue.
“The family has even given medical evidence to them and the answer they have is that the request for out of home care is noted.

“A letter from July 2017 said that their daughter remains on a prioritised residential waiting list. That gives you an idea of what's going on. Here we are over two years later,” he said.

“What we need and don't have is adequate frontline services. There are not enough in place. And if residential care is not there or delayed, there should be assistance given at home but there is a huge shortage in that too,” he said.