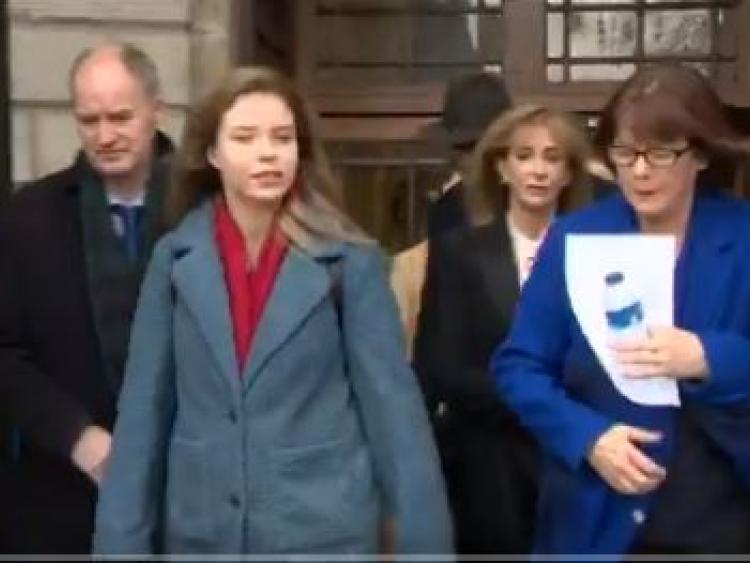 A student, who claimed she developed the sleep disorder narcolepsy after receiving the swine flu vaccine a decade ago, has described how she was "like a sloth" when the effects of the disease first hit.

Aoife Bennett from Naas settled her action at the High Court on Wednesday.

Speaking on RTÉ's Today with Seán O'Rourke, Ms Bennett said she was satisfied with the outcome yesterday, but looking back she did not know how she and her family coped with the long drawn out days at the High Court.

She said was not expecting the adversarial nature of the cross-examination and said it was "very tough to watch" her parents when they were being cross-examined. Her parents Pat and Mary both hail from Portlaise. Mr Bennett is a Manager in the HSE.

Ms Bennett said she hoped that other families who had cases pending would not have to go through the same thing.

The 26-year-old said her family was "seven years in legal proceedings and had never wanted to take that route".

She added that she was shocked that the Minister for Health and the Department of Health had allowed it to go on for so long.

Ms Bennett said she imagined that it was very disappointing for the other families that there was no admission of liability in her case and said that her family was disappointed with that too.

She said her family was not anti vaccine because, if they were, she would not have got the vaccine in the first place.

Ms Bennett said she was very active and athletic, and school was no bother until she got the vaccine, when "things changed very drastically".

Ms Bennett said it took about two weeks before the side-effects began after she received the vaccine on 10 December 2009.

She told the programme that the first day that she noticed a change was when she was shopping in Dublin with a friend on 23 December.

She said she could not get from Busaras to Abbey Street because she was completely disorientated and it took her an extra two to three hours to get home.

That Christmas, she said, she had to force herself to come downstairs for Christmas dinner and spent the rest of the day in bed.

She said her mum read an article in March 2011 about another girl who had suffered narcolepsy after receiving the swine flu vaccine. The symptoms fit, she said, so she went to get tests.

Ms Bennett also suffers from cataplexy, a medical condition in which strong emotion or laughter causes a person to suffer sudden physical collapse though remaining conscious.

Before she received medication for this, she said, she could literally collapse to the floor.

She said she used to run a lot and play volleyball and although she tried to continue, it was impossible before she was diagnosed.

Ms Bennett said when she was first prescribed medication to help keep her awake, it worked wonders but she later realised she did not have the alertness to sit in a classroom and take things in.

She added that it had been a bit of trial and error with medication and over time she has had to increase dosages.

Ms Bennett, who has a primary degree in English and Irish, and a Masters in primary school teaching, said it was unlikely that she would ever be able to work full time.

The busier she was, she said, the harder it was to cope.

She said that one of the nighttime medications she takes means she cannot take any alcohol, so she has to pick and choose three or four nights out a year that she can enjoy.

Ms Bennett said that she did not really socialise at night, adding two nights out in a row in the space of a month or less would have a huge impact on her.

She added that as far as she knows, there is no cure for the diseases.