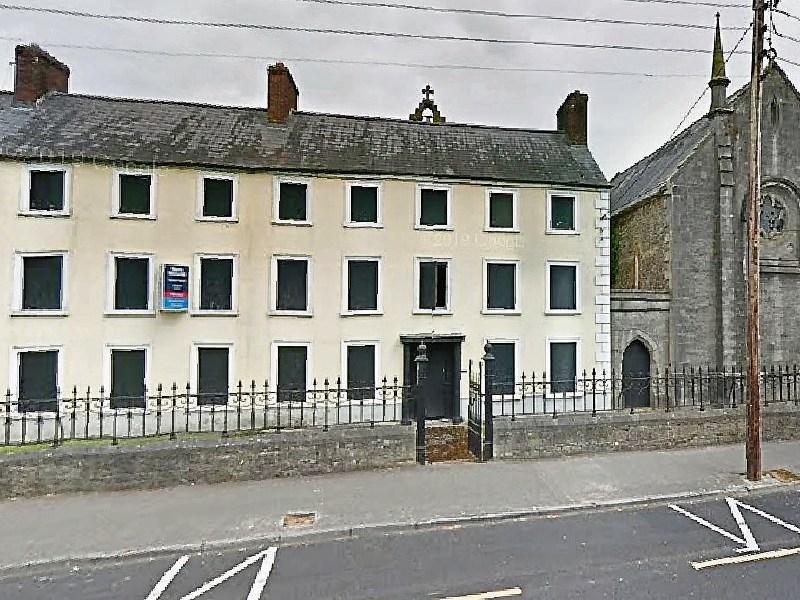 The former Presentation Convent in Stradbally is “collapsing” from the inside a county councillor who along with other councillors have demaned that Laois County Council intervene and possibly buy it.

The boarded up building on the Main Street is vacant for many years and has been sold several times.

Cllr Tom Mulhall tabled a motion to the November meeting of the Graiguecullen Portarlington Municipal District, asking that Laois County Council locate the owner with a possible view forcing its sale to county hall via a Compulsory Purchase Order (CPO).

“It is sitting there 12 years unoccupied and getting worse. Inside is actually collapsing. It is falling asunder. In the interests of everyone I’d like to see this site change hands. There could be many an opportunity to develop it. It’s only a matter of months or years for it to fall down,” he said.

He said the building could be a guesthouse or primary care centre.

“I ask Laois County Council that when they find the owner, they liaise with them on what can be done. Any option is better than leaving this vacant for another 12 years. There is a need in Stradbally for a primary care centre and for a guesthouses. I’d be looking for an update at the January meeting. I want this progressed,” he said.

Cllr Paschal McEvoy from Stradbally said that it is vacant for the past 25 or 30 years.

“Mistakes were made from day one. It should have been given to the people of Stradbally instead of selling it on trying to make millions. Leaving it idle is disgraceful,” he said.

Cllr McEvoy said that the convent was sold to a developer but he believed NAMA is now involved.

She noted that Stradbally Social Services now own St Joseph’s Hall, part of the original complex.

In 2012 the council reported that it had fined the owners of the convent €12,000 under the Derelict Sites Act.

At that time the fine had not been paid. In 2017 it was removed from the council’s list of derelict sites because hazards had been eliminated and the file was closed.

Other convents in Laois were repurposed after closure. The Brigidine Convent and school in Mountrath is now a thriving community and business centre, while the Presentation Convent in Portlaoise is to be turned into 52 social housing apartments by housing bodies in a €10million project.