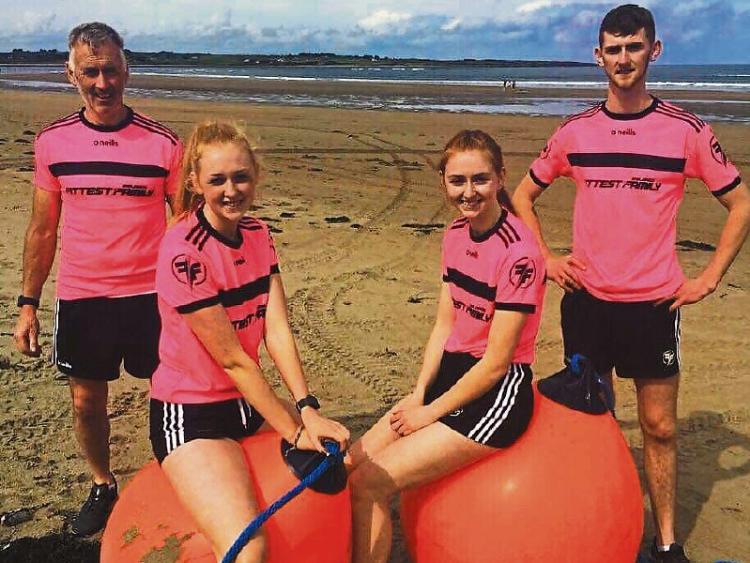 A Laois family have reached the semi-final of this year's Ireland's Fittest Family on RTÉ.

The Maher family from Ballickmoyler will be on display n the semi final this Sunday evening at 6.30pm.

“It has taken hard work, obviously,” says mother Dymphna, speaking of the participation of her husband Nick, son Fionn and daighters Maedhb and Cara.

“Fitness has always been a huge thing for them, from when they were very young,” she says.

“When my husband, Nick got sick, he went down the herbal route of medication.

“We found that herbs worked for us.

“He then became a herbalist after getting a degree from the school of herbal medicine, which was a four year course.

“He is now a hearbalist in Killeshin.”

The Mahers have reached the semi-final after a gruelling series which at the outset saw 35 families in Athlone vying to make the show.

“To even get beyond that stage was an achievement,” says Dymphna

Nick is described as farming-fit and takes part in local 5k and 10k races in the colours of St Abban's.

He was a selector with the Killeshin GAA team which reached the club's first-ever Laois senior football championship final in 2019.

Fionn, aged 21 is a student in DIT and plays GAA with Killeshin and was part of the Killeshin Gaelic Football squad in the Laois senior county final.

He has previously been involved with St Abban's AC.

His participation was almost a miracle due to had a bad accident while on holiday in Croatia last year.

He was in the hospital for some time after falling 28 feet onto concrete.

The accident left him in a wheelchair with broken wrists, jaw, kneecap and ligament damage.

Dad Nick says it was remarkable to see him competing after making a full recovery.

Eldest daughter Maebh, aged 19, is studying to be a teacher at St Patrick's Teacher Training College in Dublin.

She has won medals for athletics and competes at middle distance.

Younger daughter Cara, aged 17, is in 6th year at Gaelcholaiste Cheatharlach. She says football and running is her passion.

Nick says both his daughters really benefit from the coaching of Eamon Kelly at St Abban's.

He also praised Noel and Niamh Richardson of Kilkenny City Harriers who also train his daughters.