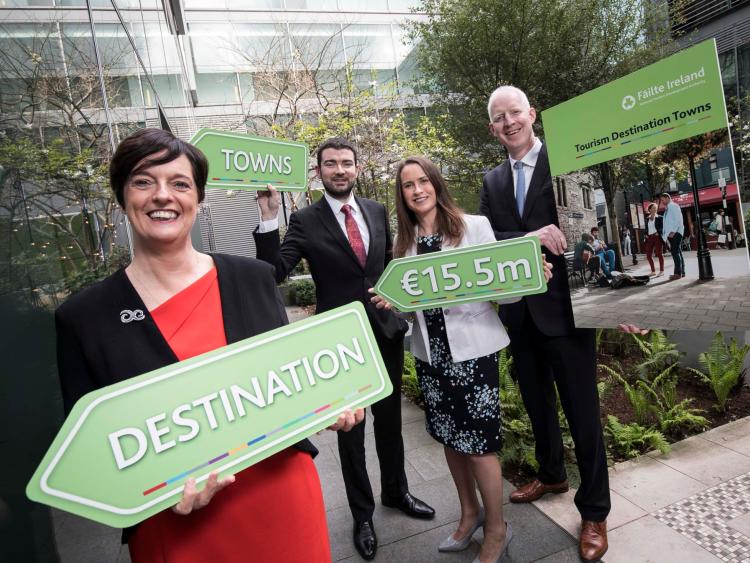 Portlaoise has been earmarked for significant funding by Fáilte Ireland to develop its tourism potential as part of the Destination Towns scheme, according to the tourist body.

The funding will be allocated through Laois County Council as part of the €15.5million ‘Destination Towns’ initiative launched earlier this year by the National Tourism Development Authority.

Fáilte Ireland says that up to €500,000 per local authority across the country will be allocated in two rounds by Fáilte Ireland to boost the attractiveness and tourism appeal of towns nationwide. The tourist body says process of identifying the towns that receive funding commenced in mid-2019 and was led by the Local Authorities in consultation with Fáilte Ireland.

The second round of allocations, which includes Portlaoise, will take place early in Spring 2020 when, according to Fáilte Ireland, further developmental work has concluded with Laois County Council.

Laois County Council's Chief Executive John Mullholland said he is confident that Portlaoise will be a beneficiary of the second round allocation in the coming spring.

"In our application last September we sought funding of €500,000 in respect of a number of projects in the core town centre. Matched funding from Laois County Council will bring the investment package up to €625,000 to be spent later next year on improvements to the public realm, the farmers market area the interpretation of the Fort Protector, wayfinding and tourist information services.

"More significantly, the scheme will enable Laois Tourism, the Portlaoise Town Team, the Laois Chamber of Commerce, Laois County Council and other stakeholders to work together in an effort to improve the quality of visitor attraction and visitor experience in Portlaoise and its relationship to iconic attractions in the County.

"This announcement is a very positive and welcome development for our county town,” he said.

Minister of State for Tourism and Sport, Brendan Griffin T.D. confirmed that every county in Ireland will benefit and the first round of allocations will take place from January.

Fáilte Ireland says the scheme is part of the National Tourism Development Authority’s work to drive a better regional spread of overseas and domestic visitors and spend.

Through the scheme1, which was launched earlier this year, every Local Authority in the country had the opportunity to bid for funding of up to €500,000 to develop a town in the county to enable it to improve its tourism offering and make itself more attractive to visitors. The Local Authorities will also provide funding for their projects.

With Fáilte Ireland research consistently showing that attractive towns and cities are key motivators for overseas holidaymakers coming to Ireland, the tourist body says the new scheme will provide funding to Councils to enhance public spaces such as squares, streetscapes and markets in a way that will engage tourists and enhance their experience in key towns.

Minister for Transport, Tourism and Sport, Shane Ross said tourism’s importance as an economic driver for Ireland cannot be overstated.

"It sustains 260,000 jobs across the country and generates revenue in communities nationwide. Initiatives like Destination Towns, funded through the Government’s Project Ireland 2040, is a great example of how investing in infrastructure can deliver long-term economic benefits for local communities,” he said in statment

Minister of State for Tourism and Sport, Brendan Griffin T.D., said it was good to see the tourism body working with councils.

“I’m delighted to see Fáilte Ireland and the Local Authorities continuing to work hand-in-glove to ensure towns nationwide can fulfil their tourism potential,” he said.

“The towns which reap the greatest benefits from tourism and schemes like Destination Towns are those where all local tourism players work together - from local authorities and businesses to the communities themselves, each complementing another’s efforts to create a full and appealing offering for their area.

"A core focus of Fáilte Ireland’s work is to drive a greater regional spread of visitors and revenue across the country. Initiatives like our Destination Towns scheme are critical in doing this by boosting the tourism appeal of destinations across Ireland. We’re delighted with the support from the local authorities and we would like to thank them for their work in putting forward such compelling cases for investment,” he said.

“The concept behind Destination Towns goes to the heart of what the local authorities are about: making great places to live, work and visit. The initiative provides a really practical focus to help us to plan strategically for the infrastructure, attractions and public realm improvements that will appeal to visitors and unlock or enhance our tourism offering, including in collaboration with local business and communities,” he said.

Fáilte Ireland’s Destination Towns scheme is funded under the Government’s Project Ireland 2040 strategy with the aim of driving sustainable growth in the Irish tourism sector and higher revenue and job creation around Ireland.

The full list of ‘Destination Towns’ that will receive funding between the first and second round allocations are:

This is the first scheme of its kind and marks change in the way Fáilte Ireland is working with local councils to drive tourism to regions across the country.

Key project aims are to:

- Create a sense of place in towns across Ireland, attracting visitors to the area and helping to provide the necessary infrastructure to support regional growth in the tourism industry.
- Increase visitor dwell time by enhancing the ambiance and vitality of towns, leading to increased spend in local tourism businesses.
- Increase footfall in visitor attractions and activities through improved orientation and wayfinding.