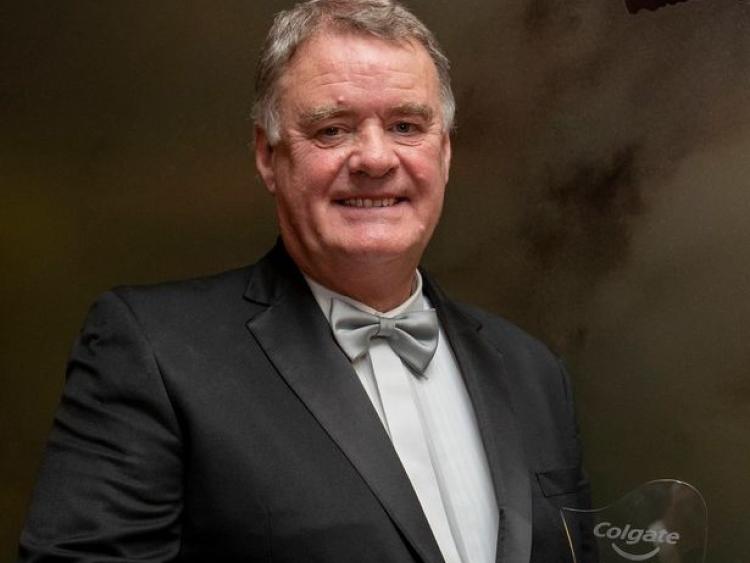 Padraig Ó Reachtagáin from Cullohill who has won the Irish Colgate Caring Dentist of the Year Award.

Laois native and Tipperary-based dentist Padraig Ó Reachtagáin has been named ‘Colgate Caring Dentist of the Year 2019’ for the compassionate treatment he provided to a woman who was injured in an incident of domestic violence.

The woman, who wishes to remain anonymous, said Dr Ó Reachtagáin, who hails from Cullohill, not only repaired her broken tooth, he also showed her and her children a way out of a violent situation.

The woman, who travelled a considerable distance to Roscrea to receive treatment, was full of praise for the popular dentist.

“Padraig opened up his practice on a Saturday morning just to treat me at much expense to himself I am sure. He was caring, compassionate and also advised me on the avenues I could go down to get myself and my children into a much safer environment.

"I can’t express how thankful I am; he not only repaired my tooth but showed me a way to get out of a violent situation – myself and my children are now safe due to his care and understanding….he truly deserves this award,” he said.

Nominators receive a prize if the dentist they nominate wins. In this case, the woman asked that in the event of her nominee winning, the €1,500 prize money should go to Women’s Aid.

Dr O’Reachtagain, who has been running his Street Dental Practice in Roscrea for 30 years, said once the immediate dental issue had been addressed, the most important issue was the safety of the woman and her children.

The award has led to widespread media coverage including an interview with Ryan Tubridy on RTÉ Radio 1. Padraig revealed his Laois roots to Ryan and also said that it was his upbringing in Cullohill that led himself and his wife Virginia deciding to move back to Ireland from London to raise his daughters Tara and Clare.

"I was so happy in my own childhood growing up in Co Laois that I wanted our children to have the same sort of upbringing as I had and thankfully they did," he said.

Padraig and his sisters were raised by his father Seamus (Rattigan) who hails from and still lives in Cullohill with his wife Nora, a native of Co Clare. The couple were both school teachers. Seamus was principal in Cullohill National School where his wife also taught.

MORE BELOW PICTURE OF Padraig with his wife Virginia at the awards. 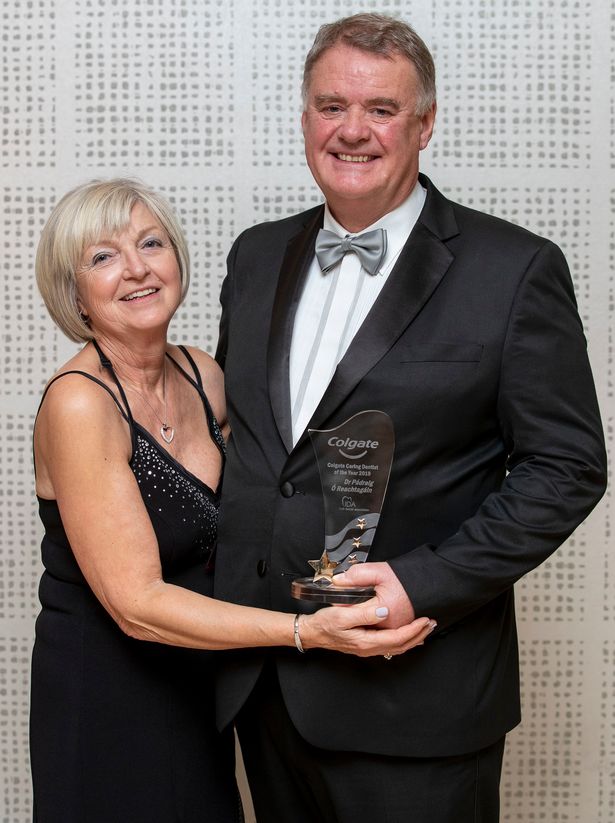 The President of the Irish Dental Association, Professor Leo Stassen praised Dr Ó Reachtagáin for his generosity of spirit and professional dedication in treating a woman who found herself in a violent situation.

“Padraig displayed tremendous sensitivity and understanding of the physical and emotional needs of a patient in distress. After ensuring the patient had a secure and caring environment, he went on to provide her with excellent treatment and wise counsel. This enabled the mum and her children to escape from a dangerous situation. Her story - and indeed her own generosity in donating her prize to Women’s Aid - will undoubtedly inspire others who find themselves in similar situations,” he said.

There were several other winners on the night, including Guiney Dental in Ballincollig in Cork, which was named the Dental Team of the Year. Dr Freda Guiney’s practice received the award for their outstanding kindness and the excellence of the care they provided to a patient struggling with severe mental health challenges over a prolonged period.

The awards, which were attended by over 360 people at the Clayton Hotel, Burlington Road last night (Saturday) enable patients to nominate dentists who have provided them with dental care above and beyond their expectations. The IDA received over 1,000 nominations from dental patients all over the country for this year’s awards.

Professor Stassen said there was a wonderful dentist/patient story behind every nomination.

“You have nervous patients, people with MS, people who’ve had accidents in remote locations, patients with suspicious looking lumps, people with aspergers syndrome, young people living in direct provision, people with mental health issues, patients with shingles. Every patient and situation is different. The common denominator is the tremendously high standard of care they received, which reflects so well on our profession”

“The enthusiasm of patients to share their stories is a wonderful reflection on the care they have received from their dentist. We would like to congratulate all the award winners and all the dentists who were nominated by their patients.”

“In recognition of the courage and generosity shown by the woman who nominated this year’s ‘Dentist of the Year’ Colgate is delighted to match her donation and present it to Women’s Aid,” she said.