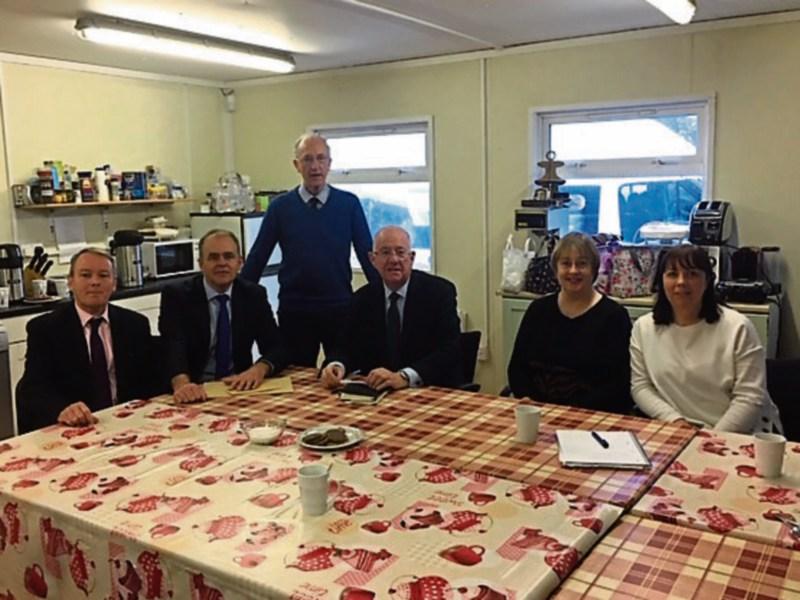 The first Minister for Education to ever visit Kolbe Special School in Laois was reportedly “shocked” by the poor conditions there, according to the principal.

Minister McHugh spent over an hour meeting staff and pupils, all of whom have severe disabilities.

“We were delighted that he came. We are a school for 20 years now and no Minister ever came before.

“I spoke to him about trying to push for a new school. We need it desperately. I also told him about the lack of services in the HSE for our children, such as psychology and behaviour therapists and occupational therapy,” she said.

On the condition of the building, she said “I didn’t have to talk about that. He could see that.”

She described problems with the building which has three classrooms and six prefabs.

“There is a classroom with damp spots. There is a lack of space. He couldn’t get over that all our equipment is in the school hall. He was very nice,” the principal said.

She is hopeful the visit will spur on the building of a new school, earmarked for years on HSE land next to the existing building.

“We met already with the design team about a month ago and we are waiting on first draft plans. He did say he would do his level best on their side to fast track it. We have been told we will have a new school five years from now. The last two years will be building it,” Ms Mahon said.

The small school on the Block Road in Portlaoise serves children from all over Laois. With growing numbers of pupils the sensory room was sacrificed for a classroom, and wheelchair equipment fills the corridors and central exercise hall. The school is also used by the HSE to attend to the children’s medical needs in a prefab nurses station.

A new building is included in the Department's six year capital programme. The 2,265 m2 single storey is to have eight classrooms, a general purpose room, library, resource area, woodwork, art and exercise therapy rooms and be big enough for 48 pupils.

Last May it was announced that Kolbe was put on the Adapt 2 fast track program for its design.

A new building for Kolbe Special School has the full commitment of the Department of Education, it has said in a statement following Minister McHugh's visit.

“The Minister was hugely impressed by the dedication of all the staff at Kolbe school and assured them that the Department was fully committed to the major building project”.

“The Department has been engaging directly with the school in relation to its particular needs and has recently approved further enhancements to the project brief that includes an expansion of the design to include safe spaces and re-designation of some rooms including medical treatment/nurses’ room,” the statement said.

A project manager is appointed as part of the Adapt 2 programme to drive the project on.
“The project manager and the full design team have had an initial meeting with the school board and have started architectural planning including site report and initial sketch scheme. The school also recently attended a briefing session in Department offices,” the dept said.

Dep Stanley has welcomed the visit.
“Last January in the Dáil I invited Minister McHugh to see for himself the difficult conditions that staff were working in and students in Kolbe were enduring. He got to see at first hand the very restricted facilities. 80% of the school is prefabs, many of which are too small and not in good condition,” he said.

Minister Flanagan also welcomed the visit.
“At my invitation, I was delighted that Minister Mc Hugh visited the school. I felt it was really important that he visited the facilities, met with staff and pupils and saw first hand the real need for the building works to commence,” he said.
“I pay tribute to the Staff and Board of Management who have been working in challenging and difficult conditions for a number of years. Despite this, there is a warm atmosphere in the school with devoted staff who nurture and care for their pupils. I will continue to work with the Minister and the Department to ensure that construction commences without further delay.” Minister Flanagan said.