Lynda Kiernan was in Portarlington on a historic morning in May for Scoil Phadraig N.S. 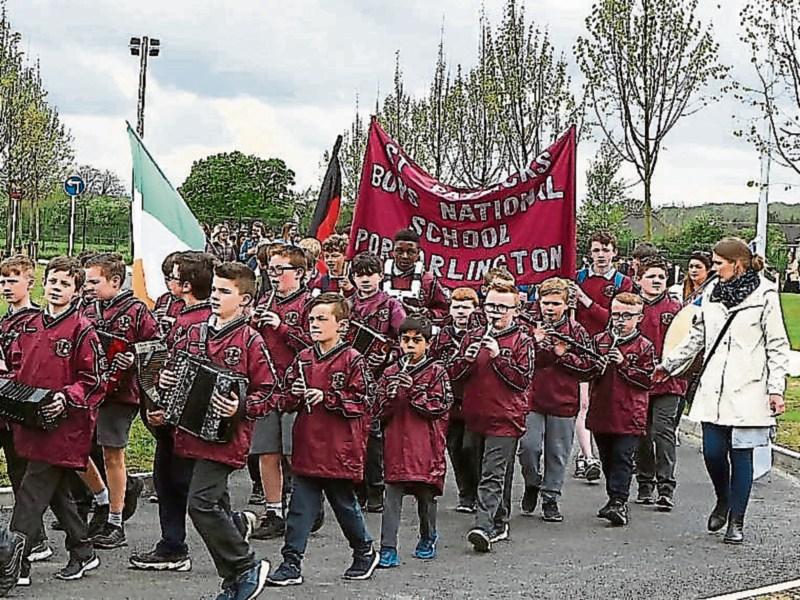 Hundreds of boys from the Portarlington area made history in May when they paraded through town from their old school building to their new one on the Canal Road, cheered on by the people lining the streets.

The parade of St Patrick's Boys NS was led by Gardaí and the school's accordion band, who played A Parting Glass, as they said goodbye to their old school on Patrick Street on Tuesday morning May 7.

The 440 boys and their teachers walked 2.5km through town, first crossing the Barrow bridge as the school moves from Offaly to Laois, arriving to their big new school on Canal Road to cheers from the crowds.

They marched through the new gates past new sports grounds up to the front door, where all the boys lined up for the first time.

Parish Priest Fr Tom Dooley blessed the building and led them in a prayer.

Principal Pat Galvin was delighted to finally get a new building.

“It's an emotional day for everyone. It's very positive but it is sad leaving, I've been there for 30 years personally. The people of Offaly and Patrick Street are losing something, we're gaining something, though they are regaining their parking spaces. It's not a Laois and Offaly thing though, we have pupils from all over. My aim is that we keep the same ethos and atmosphere,” he told the Leinster Express on the day.

He thanked the Portarlington public.

“I thank the people of the town. There are so many people behind this, the parents council, boards of management that worked for this and achieved this. I just happen to be here at this particular time. A lot of work has gone on over the last 20 years,” he said.

“We put in a running track, we have a juvenile pitch and we will have our astroturf thanks to fundraising. It's a state of the art school and a campus second to none in the country. Everything is so positive,” the principal said.

Among the crowds were grandparents Michael and Sheila Luttrell, whose grandsons Michael Luttrell and Alex and Luke Dunne are all pupils.

“It is a great occasion, my son Michael went to this school 40 years ago and back then they were talking about a new school. It was a long wait,” said Mr Luttrell. Band teacher Gerry Conway has taught 2nd to 6th class on accordion and percussion for a decade, and he led them in a hip hip hooray at the new school. Guests included Don Hickey, 77, who started school in the very first class at the old building, 66 years ago.

“I have lovely memories. All the Brothers are dead now, but I am sure they are listening to the band wherever they are today.”

Bean ní Butléir who taught in the old boys school for many years also attended the day, as well as former deputy principal Tom Dempsey.

They were of two boys who died while they were pupils in the school; Stephen Ryan and Barry Maher, and past principal Rita Quinn who died not long after she retired nine years ago.