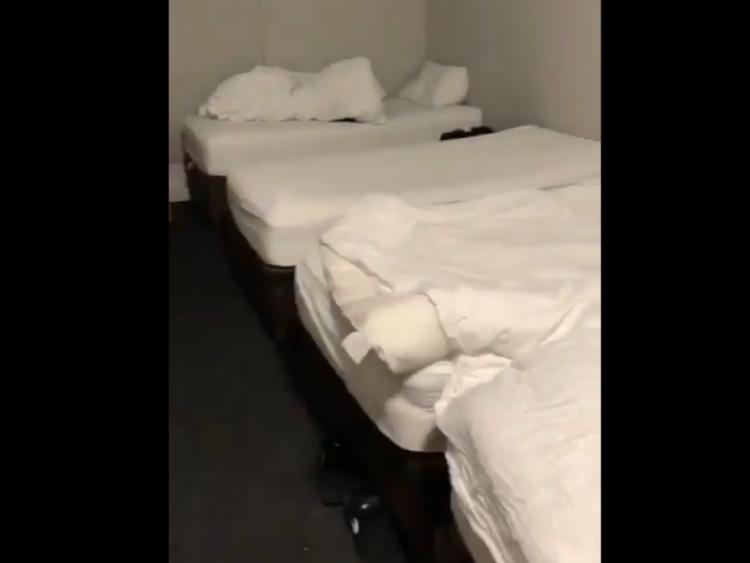 A still from a video taken in an East End hotel bedroom used for direct provision.

An online video showing ten beds crammed together in a windowless room in the East End Hotel in Portarlington is “staged” the Department of Justice has said.
However, a group representing asylum seekers living there stands by their claim that it is genuine.
The video was posted by MASI - Movement of Asylum Seekers in Ireland on Twitter on January 3.

This is outrageous!!! The average rate is €1050 per month for each asylum seeker in Direct Provision (more than double in emergency accommodation). This room in the East End Hotel in Portarlington has 10 asylum seekers in a room with no windows. Queue for shower and toilet pic.twitter.com/1Ql67FPJgY

MASI said the overcrowding was “outrageous”.
“The average rate is €1,050 per month for each asylum seeker in Direct Provision. This room in the East End Hotel has 10 asylum seekers in a room with no windows. Queue for shower and toilet,” the group claimed.
Minister for Justice Charlie Flanagan responded that day.
“I am concerned at the content of this video clip. I have sought a report on this matter from the appropriate authorities. There are clear standards in respect of accommodation that should be upheld and complied with at all times,” he said in a tweet.
However, the Department of Justice and Equality then stated they were told the video was staged.
“The Department has been informed that this video does not represent the reality at this facility. Hotel management has informed the Department that last night, a number of residents moved themselves from their assigned rooms into the room shown in the video. The footage circulating appears to have been staged and the residents involved have been asked to return to their allocated rooms,” the department said.
They said that no more than six men are in any one room.
“No room being utilised by the Department in the hotel has an occupancy greater than 6 persons.
“Similar claims were made about the accommodation in the hotel last Autumn and subsequent Department inspections confirmed that the accommodation arrangements at the hotel had been misrepresented in a staged video at that time,” the Department said.
“The East End Hotel is one of a number where accommodation is being provided on a short term basis to international protection applicants while places are being sourced in dedicated accommodation centres. A number of former residents in the hotel were transferred to the newly opened centre in Ennis before Christmas. The Department continues to work assiduously to relocate applicants ,” they said.

There was a rise in applications in Ireland of 60% in 2019 they said.
“The Department acknowledges that the use of hotels and guesthouses on an emergency basis is an unsatisfactory situation as it does not allow us to provide the full range of services and supports that our accommodation centres provide. That is why we are working hard to increase capacity and open more accommodation centres.”

They said that some East End Hotel residents declined an offer to move out to independent living.
“A number of residents from the East End Hotel were offered and accepted transfers to the new Ennis accommodation centre before Christmas. This centre provides independent living arrangements where residents can cook their own food and obtain their groceries in an onsite food hall. A number of other residents from the hotel refused the offer and are making alternative arrangements for their own accommodation, as they are entitled to do,” they said.

The Department said it is available at all times to address any concerns of residents, and they can also contact the Ombudsman.

On Sunday January 5 MASI issued another statement refuting the claim that the video was staged.
“We reject claims made by the Department of Justice and the management of the East End Hotel that footage showing appalling conditions in the centre was statged by asylum seekers.

“Staff claim they did indeed put 10 beds in the room because another room was not ready for occupation when the men moved in on January 3. At no point did the Department speak with the affected asylum seekers to find out what happened,” the group said.
“On January 5 we received texts from asylum seekers telling us that they have since been moved to a different room with five people,” they said.

MASI claim they were denied entry to talk to affected residents on January 4 but that residents met them and told them they were ”told you can go back to your country if you are not happy” and were refused a glass for water.

“The problems in the East End Hotel are beyond just the number of beds but extend to the general conduct of the management team. At the very heart of these overcrowded rooms is profiteering. Private operators are paid public money for each person, so the more you have the more money you can make,” they said.

The group said it has reported overcrowding to the Laois fire officer and will ask the Ombudsman for an independent investigation. “We are deeply concerned by the uncaring attitude displayed by the Department of Justice and Equality in the handling of this matter. The least we expect is for asylum seekers to be treated with some semblance of dignity.”

The East End Hotel is taking asylum seekers since last May and has 71 men living in 19 bedrooms. It is one of many emergency centres as Direct Provision Centres are full.