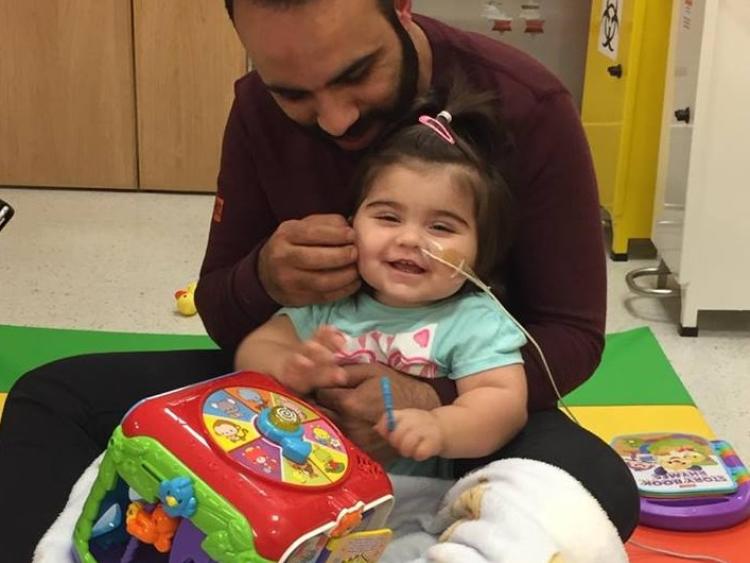 Amira Rauf all smiles with her father, Adnan Rauf

A mum is of a little girl who was injured in a fatal road crash in Laois is at her wits' end over her daughter's care has gone on RTÉ's Liveline to highlight the issue.

Amira O'Toole Rauf was left paralysed from the chest down following a car accident in Laois on November 6 in 2018.

The crash occurred on the N80 Portlaoise to Carlow road close to Simmon's Mill Cross between Stradbally and Arles. A man in his 40s was killed when his vehicle hit the car being driven by Amira's mother Caroline.

She has a severed spinal cord and will never walk again. Two-year-old Amira is currently in Temple Street Hospital and her mother, Caroline, contacted RTÉ's Liveline to raise the issue on the national airwaves.

"She has her arms which is a bonus and she has her brain. She has our full support for the rest of her life but it's so hard for us, we need to get our daughter home. I want to bring my daughter home to where she belongs but we're caught up in red tape with the HSE.

"We have been refused a home care package...they don't have the staff. In my eyes, she is medically fit for discharge.

"As a mother, what me and my daughter have gone through...I am suffering from post-traumatic stress. I still have the nightmares. I can't sleep. The horror and the impact, I relive that every night," says Caroline.

"Please let my baby come home" @joeliveline Amira was paralysed after an horrific car accident where her spine was broken #liveline She had 5 heart attacks, 3 in one night & needs 24-hour care. Her parents want her home with her brother but they can't find a way... pic.twitter.com/Z9LrR7qyjb

Caroline says that her daughter, having been fitted with a tracheal tube against her family's wishes, is trapped without adequate provision for rehabilitation or the possibility of a home care package in her native Carlow because of this intervention.

Amira could attend rehabilitation in the UK but because she has an older sibling he cannot be left at home.

Currently, Amira's family is seeking legislation for children with severe needs such as Amira for the right to have rehabilitation care in Ireland.

To listen back to Caroline's full interview on RTÉ Radio One, click here.