Labour make the cut on the 'Spring tide' 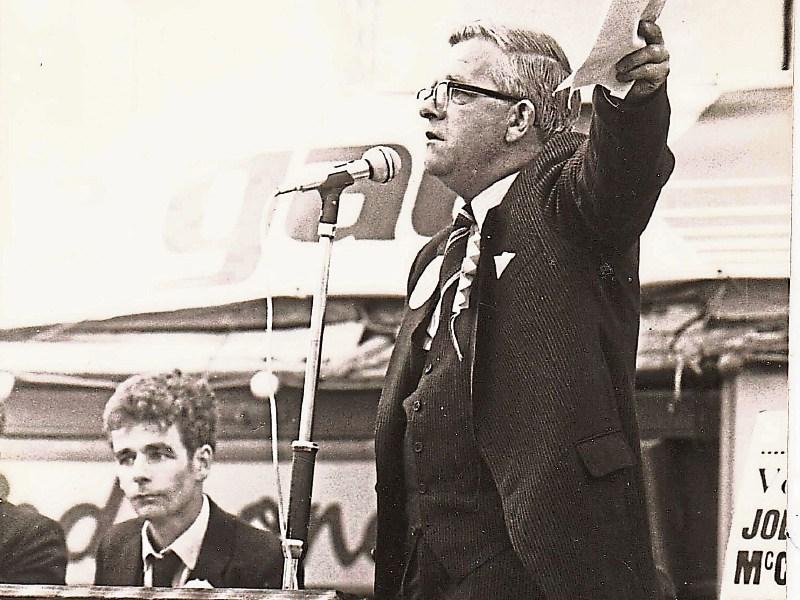 The 1992 election will always be remembered in Laois-Offaly as the occasion when Pat Gallagher made a historic breakthrough by taking a seat for Labour, the first time in 27 years that the party had succeeded in doing so.

He was elected at the expense of Fine Gael’s Tom Enright, who had represented the constituency since 1969.

It was also the first election contested by Fianna Fáil’s John Moloney, who was subsequently elected in the 1997 election.

The Mountmellick man performed so strongly as the fourth candidate of the Soldiers of Destiny that he was chaired around the count centre by joyful supporters.

The Gallagher success, in an election which saw the Labour vote rise over 100% in 1989, formed part of the “Spring tide” which saw over 30 Labour T.D.s elected around the country , including areas like Clare and Sligo-Leitrim which were not traditionally Labour strongholds.

The election took place following the collapse of the Fianna Fáil/Progressive Democrat coalition, only months after Albert Reynolds had succeeded Charlie Haughey as Taoiseach.

It was a time when Fianna Fáil was extremely unpopular nationally, with widespread concern over various financial scandals.

The election was also the first one following Brian Cowen’s promotion to the Cabinet as Minister for Labour.

He easily topped the poll, and was elected on the first count with 10,117 first preference.

For Cathy Honan, the election was a disappointing one, as the PDs suffered from the Labour advance, but Labour will remember 1992 as the year they won their first Laois-Offaly seat since 1965, when Harry “Har” Byrne of Stradbally was elected.

The full first count results were as follows: