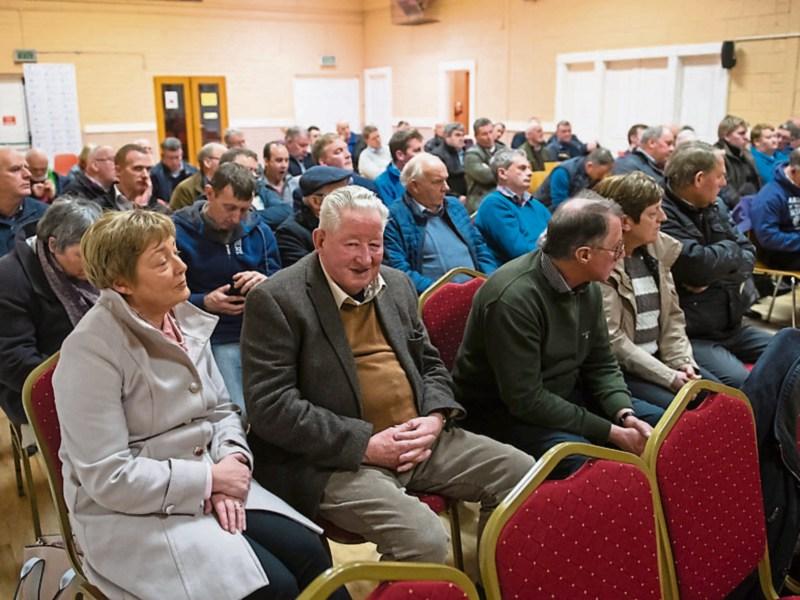 A section of the attendance at the meeting

Setting out their positions each candidate staked their claim to the farming and rural vote at the recent IFA debate.

“Farmers must see a fair return," said Fianna Fail's Peter Ormond. "The future is producing goods at a profit. The beef industry is a cornerstone.”

Pauline Flanagan (FF) said she was brought up on a farm. She did not want to see the suckler herd reduced. On CAP they would be fighting for the €2bn package. “Methane gas is short lived and needs to be calculated differently,” she said.

John Leahy (Ind) said it was important to “put our best foot forward on CAP.” He also floated the idea of legislating on price regulation.

“Rivers flood in my area after two nights rain and they say it's climate change. It's not. We need a river clearing programme. We have the workforce to do it.”

Pippa Hackett (Greens) outlined her background in farming including a degree in agriculture. She said a tsunami was coming. “Food production cannot harm the environment. Farmers should be in receipt of the best prices. Fine Gael and Fianna Fail have overseen the consolidation of the processing sector.

“CAP needs to be reformed. If we want change then a mind shift is needed.”

Carol Nolan (Ind) said that farmers had got a raw deal. “Support is needed for the beef sector. We need producer organisations. I am totally opposed to Mercosur.”

Charlie Flanagan (FG) said that Brexit was “a life changing experience. CAP reform is a huge issue for the immediate future.

“Fine Gael is at the heart of Europe. When it comes to negotiation that is of huge importance.

“Irish agriculture needs to be resilient and innovative."

Brian Stanley (SF) noted that he had introduced a Beef Price Transparency Bill, which allows farmers to see what is going on in various factories. “Only recently I asked my party to use its speaking time to reject Mercosur. It got the support of the Dail. The new government should be bound by it.”

He noted that Sinn Fein was the only party not in favour of increasing carbon taxes. “Loading taxes on people will not save the climate, there are alternatives.2

Marcella Corcoran Kennedy (FG) stressed the need for a strong CAP budget. “Farmers are a part of the solution,” she stated.

Sean Fleming (FF) said the priority was CAP. “We need an appeals process and a food ombudsman which would prohibit unfairness for traditional producers in the food supply chain. Farmers should be treated equally on income tax.”