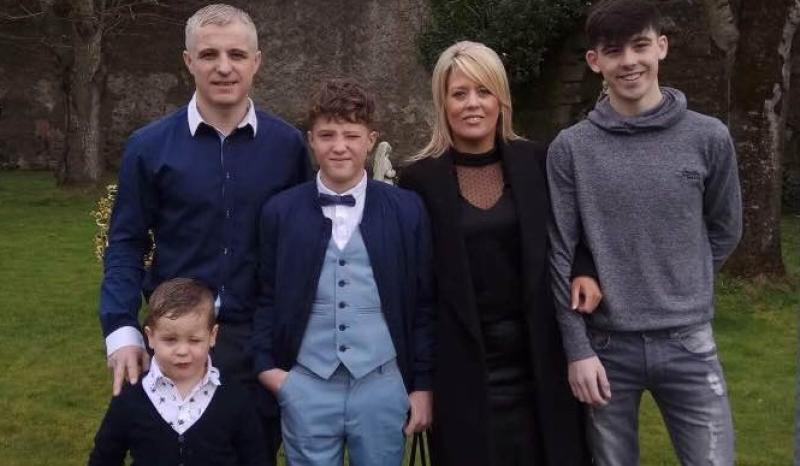 A young Laois mother of three has received the shock diagnosis that she is in heart failure and needs a transplant.

Denise Geoghegan, 39 from Cathair na gCapall in Portarlington went from feeling unwell after Christmas to now being confined to a hospital room waiting and hoping for a life saving heart transplant.

A day ago the community began donating to a fundraising account to support her husband and three children, and it is nearing €5,000 such is the regard for the family in the area.

She spoke to the Leinster Express this Wednesday February 19 about the traumatic past few months.

"The biggest shock was being told in James' hospital that it was looking like I needed a transplant. I was on my own at the time. Now I just want to get home to my kids," she said.

There is a history of cardiomyopathy in her family. Her dad is on a pacemaker and her aunt died from the disease. Denise had been tested in 2007 but heard no more so she thought she was fine.

She had gone to her doctor in the week after Christmas as she felt really tired and her legs and feet were swelling. He sent her straight to Portlaoise hospital.

Her husband Emmett explained what happened.

"She was there for a week. Her heart was functioning at 10%. It just came on her, it's heart failure. There was talk of a pacemaker but they decided she was too weak. They transferred her to James' hospital and she was there for another week or so. Now she is in the Mater hospital in the coronary care unit. Last Friday they put her on the transplant list," he said.

On the same day that Denise was put on the list, the first heart in a month became available for transplant. Denise and another patient were prepared and 'worked up' for it but Denise was not chosen.

"She had antibodies in her body from her diabetes and that went against her. The surgeon told her she could be let down three or four times," Emmett said.

"The woman who got the heart is doing great. She is 10 years older than me, it's a bit of comfort to me that she's alright".

"It really is hard to wait for someone to have a tragedy but I am trying to block things like that out right now, I have to focus on going home to my family," Denise said.

She is so sick that she cannot come home or even leave the coronary ward until she gets a heart transplant.

"I am on a lot of drips, I can go to the toilet and walk around the desk," she said.

"We can't even put her in a wheelchair and take her downstairs for a coffee," Emmett said.

He praises his wife for staying mentally strong and positive.

"She is in good spirits, taking it better than I could. She is a strong person that way," he said.

They have three sons, Curtis is 20, a Blanchardstown college student who works in Spar in Portarlington. Corey is 14 and Caeden is 7.

Emmett works at diamond drilling in Dublin and is working as much as he can, driving up and back home to see their sons, then driving back up in the evening to see Denise.

"It's tough. It's hard getting the lads up to see her too. My sisters are a big help they are making dinners for us every evening. I do a bit of homework with Caeden then go back up. I'm trying to get into a routine. It's just the way it is. It's just a sticky situation, there are others in a similar boat. I am trying to stay strong for the boys," he said.

"Emmett is doing great, it's a lot for one person to take on, working and travelling up to see me and minding the boys," said Denise.

She works in DPD couriers in Portarlington.

"Both of our employers have been so supportive. I've taken about 10 days off already to be with Denise. I will need to take a month or two off after the operation too to mind the boys so Denise avoids infection," he said.

Denise's best friend and neighbour Mary Mulhall has set up a gofundme account after consultation with Denise.

"They were both working full time and their outgoings are big. It's hit them really hard. It could be a year before she gets the transplant. Everything seems to be falling apart for them," Mary told the Leinster Express.

"Emmett will have to take time off. Money shouldn't be an extra burden," she said.

Denise (nee Lyons) and Emmett have thanked everyone for their support in any way.

"I'm born and reared in Portarlington, it makes you feel a lot better, people are holding coffee mornings. A massive thanks to everyone, I really appreciate it," she said.

"It is unbelievable support, from Bracknagh where I'm from and from Portarlington. A big thanks to everyone," Emmett said.