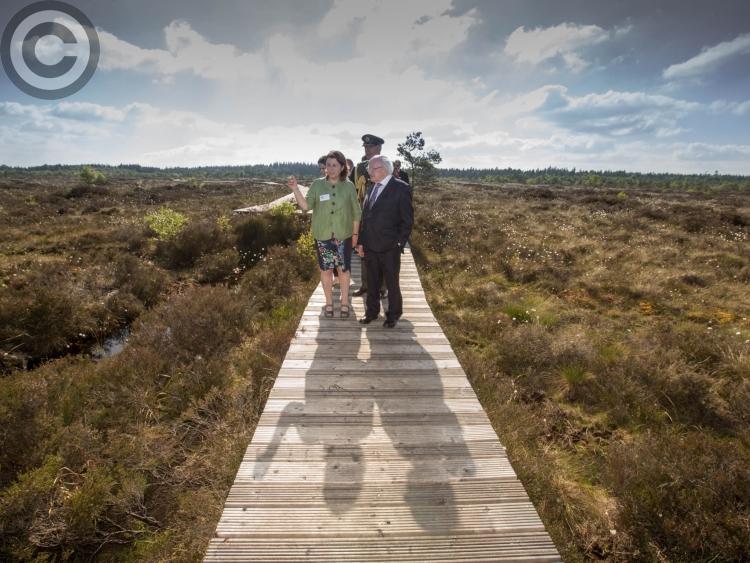 President Higgins viewing Abbeyleix Bog, whose committee are among objectors to a planned nearby quarry

A planned new quarry close to a restored bog in Laois has been put on hold.

It is understood that Laois County Council has put the plan on hold with further information requested on the plan.

The planned quarry was met with objections from An Taisce and Abbeyleix Bog Project and a local residents association among others.

An Taisce says the plan should be refused as it failed to address the effects on the Abbeyleix bog and the ecology of the site and its environs. It would have "a particular adverse impact on Abbeyleix and its environs".

"Abbeyleix bog is a national leadership example of community led ownership and management of a raised bog," it said.

"We the directors of Abbeyleix Bog Project find it unbelievable that the Environmental Impact Assessment Report (EIAR) would fail to consider the local lands and habitats let alone the Abbeyleix Bog Project given the work that has occurred to protect and enhance the bog over a 20 year period by the community and Bord na Móna." they said.

The Irish Peatlands Council also made a lengthy objection to the proposal, noting the potential negative impact to the buffer zone around Abbeyleix Bog, and the lack of detail on a "wholly incomplete" EIAR.

Grallow Residents Association had also objected. They said the only site entrance is 300m from their estate of 100 residents and are concerned about heavy vehicles along the entrance road.

The application is by Booth Precast Products Ltd on 8.5 hectares in the Knocknamoe & Ballymullen townlands. It sought to:

"develop a total area of 8.5 hectares comprising: Removal of existing stand of trees, vegetation and overburden; Extraction of underlying sand and gravel; Upgrading of existing entrance and sight lines to include removal of boundary vegetation; Construction of screening berms; Erection of an office/canteen and wheelwash; Landscaping and restoration of the site; All associated ancillary facilities/works; The applicant is seeking a 20 year permission as part of the planning application; The application is accompanied by an Environmental Impact Assessment Report (EIAR)"

A decision was initially due on March 3 by Laois County Council planners.