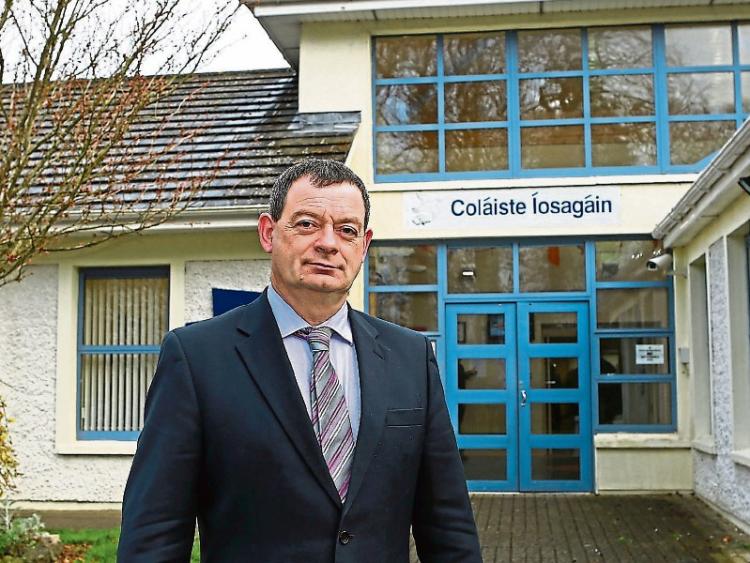 A new building for Portarlington’s rapidly growing secondary school is estimated to cost more than €20 million but there are years more of waiting before it will be a reality.

Coláiste Iosagáin now serves 1,006 students from Laois and Offaly but is bursting at the seams with a plethora of prefab classrooms supplementing the cramped old school building.

“It is considered the best option by the Department of Education and we want it too,” he told the Leinster Express.

However the big cost is a hurdle.

Several different options were designed by Kennedy Fitzgerald Architects and detailed costs are being calculated.

“There are at least three designs of new schools. They look fabulous. The view is that it should have capacity to grow and expand, or even possibly split it in two. Because it is so expensive they want to future proof it. The department has to have justification for a new school, to look at numbers,” he added.,” he said.

“We hope that in a few weeks the department will approve a design. But we feel that because of the cost, it will have to wait for a new Government to approve it,” he said.

A new school would be built on the playing pitches at the rear of the school he said, with the old buildings later replaced by new pitches at the frontof the site.

He described conditions in the old school building.

“It is cramped. We are actually out of room for lockers. It was only built for 700 or 750 students. We have got what we looked for in extra prefabs. We have two new science rooms and a woodwork room. We needed them because we couldn’t keep expanding unless we got them,” he said.

He expects to get the final batch of prefabs by this time next year.

“We are getting a resource room, two general classrooms, a DCG room, two offices and a toilet block. We will actually run out of space for prefabs then. We can’t put them where we will be putting the new school, this is it,” the principal said.

Walking between the prefabs creates its own problems.

“We will have to get security fencing because the school is very open and vulnerable with students walking in and out to prefabs. When all is finished we may fund a canopy walkway because students are getting wet in heavy rain walking to classes,” he said.

He said that while new prefabs are high quality and insulated with heating and air conditioning, they are have a limited lifespan.

Mr Bennett said a bigger school is justified because numbers are growing. There are 240 first years alone starting next September.

The option to split Coláiste Iosagáin into two schools is because he said the department considers schools over 1,600 pupils to be unmanageable.

“The department prefers schools of 800 to 1,000 pupils but with three deputy principals I feel we manage well,” Mr Bennett said.

Plans for an extension began back in 2014, but never made it beyond design stage.

“It is taking more time than it should. We should have had it finished by now,” he said.

The school is still at Stage 1 preliminary design in the Department of Education’s building programme.