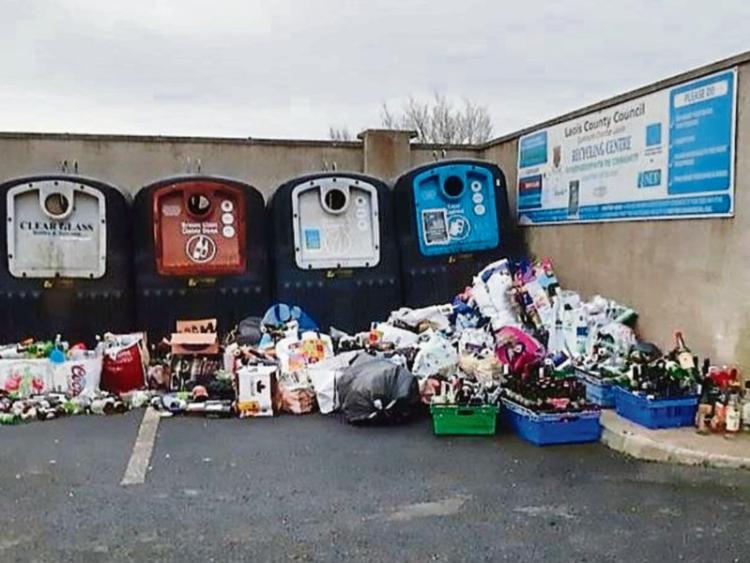 Laois people who got fines of €150 from Laois County Council after leaving bags and boxes of bottles beside full bring banks over Christmas are being invited to appeal them.

Many county councillors want the fines waived altogether, and raised it at the February meeting of Laois County Council.

Cllr Paddy Bracken led the call. He is from Mountmellick where a bring bank drew complaints after Christmas with piles of boxes and bags of empties left at it (pictured).

He said that some people were identified through car registrations caught on CCTV but others on foot could not be identified or fined.

“It is grossly unfair. These are ordinary decent people who could have gone out and thrown stuff over a hedge and walked away and never been caught. They pay their proper taxes. You encourage people to recycle not to dump. It’s morally wrong,” he said.

He asks that rather than people making formal appeals and giving excuses, that all fines be waived.

“We failed as the bins were full. The company should be fined not them,” he said.

“The council is very much open to reviewing them case by case, particularly if they were trying to do the right thing,” he said.

Simon Walton is the Director of Services over the environment.

“The legal position is this is an offence under the litter act, to dispose of litter in a public place in a way that defaces it. I acknowledge the frustration of coming to a full bottle bank but there are information signs telling you to bring it to an alternative location or bring it home if they are full. We operate 43 bring banks with the help of local communities and businesses. It is a great concern to business owners where the areas become defaced,” he said.

He added that cameras are at banks by request of councillors.

“The vast majority of people who see the banks are full, leave with their items. Others totally ignore the sign. Some deserve discretion and some don’t,” he said.

“One person left a tied bag, thought they were doing the right thing, now they have a fine of €150, I’m asking the council to waive it,” Cllr Seamus McDonald said.

“Focus on the real culprits out there 11 months of the year that’s dumping in gates and laneways. Make sure they pay and if they don’t bring them to court,” Cllr Tom Mulhall said.

Cllr Catherine Fitzgerald wants Laois back in control of the contract for the bins, shared between four counties and led by Offaly.

“The ordinary binman does extra collections, we seem not to be able to organise a simple thing,” she said.