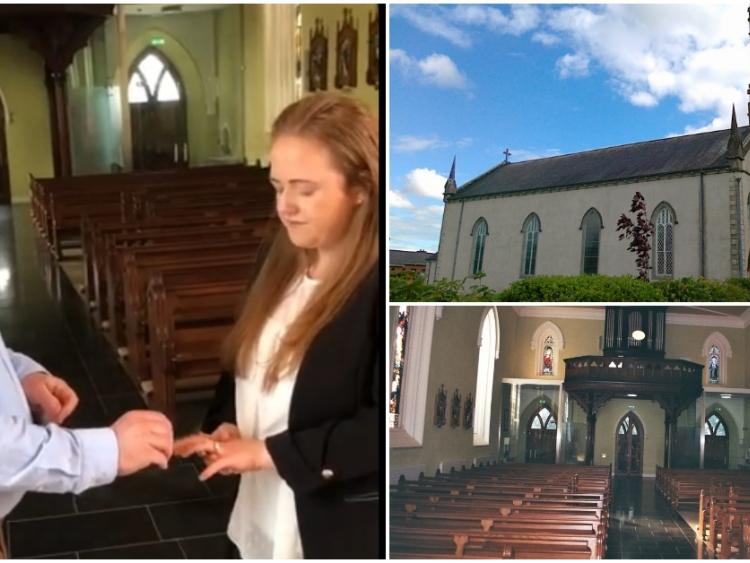 The coronavirus wasn’t going to stop this young Laois couple from saying their “I dos”.

Less than two weeks ago, hours before An Taoiseach Leo Varadkar announced the first round containment procedures by calling a halt to mass gatherings as well as closing the schools and colleges, Helena Scully and Kelvin Power made the unenviable decision to postpone their big day.

After a year and a half of meticulous planning and with over 300 guests invited to their wedding reception in the Newpark Hotel in Kilkenny, many of whom are elderly and fall into the high-risk category, it wasn’t an easy call but they bravely made the decision.

This morning, Saturday, on their original date, in front of rows of empty seats in St Patrick’s Church, Ballyroan, the couple recited their vows to Fr Paddy Byrne and a sole witness.

Speaking to the Leinster Express, the new Mrs Power explained how it all came about:

“Last week, we got in contact with our Parish Priest, Fr Paddy Byrne. To be honest, I thought he would just do a blessing or something along those lines, but he said we could go ahead and do it all today.

“We stripped it completely back, there was nothing really. We wanted to do this part today and leave the celebrations for another day. We saved the bells and whistles for the next day out. I’m not going to say for my real wedding, but for whenever we reschedule for.

“For a girl who was planning her wedding for a year and a half, it’s hard to say my ‘real’ wedding - by that, I just mean the day we had planned and hoped for. We’ll have that day when this is all over.

“It’s obviously hugely disappointing not to be able to share this day with people, but for us, this was the most important part. Look, we’ll do it all again when the time is right and share it with everyone, but today was specifically for Kelvin and I. For both of us, we just wanted to mark the day.

“The whole reason behind today is fairly simple; Kelvin and I just want to be married. As soppy as that sounds, it’s the truth.

“Today was the bare minimum. Anyone who knows me will tell you that I’d love all the frills, the big wedding, the flowers, all the guests. Today wasn’t that, but it is what it is.

“I have to say, Fr Paddy was so good. He made sure everyone was comfortable in what was unusual circumstances. Really, it was just Kelvin and myself and he couldn’t have been better or more approachable throughout all of this.

“All I will say for anyone who is getting married in the next couple of months - once you’ve made your decision, whatever that may be, you’re at ease. I’m not very upset today that my wedding isn’t going ahead because we’ve made the decision and we’ve moved on from it if that makes sense? We know we’ll have another day out like we planned.

“It was the unknown surrounding it that was the hardest part. Will it/won’t it go ahead. Will my neighbours feel obliged to come? Am I forcing people to come to a wedding that they don’t want to be at? If the shoe was on the other foot, if we were invited to a wedding next weekend I’d be saying to Kelvin, “Do we really want to go and sit in a room with 300 people?”

“Realistically we’re hoping to have our next day in August, but we can’t say 100% if that will happen. Could it be pushed back another six months? Another year? It was the unknown of it all.

“With everything that’s going on, I felt that following through with the small ceremony was the right thing to do in the midst of all this chaos - just some bit of normality during this time.”

Congratulations to Mr and Mrs Power!