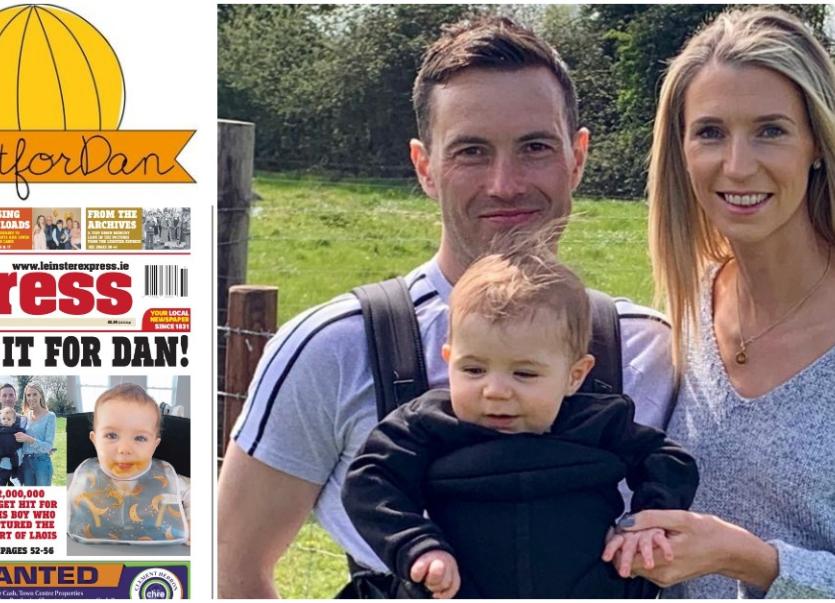 Forty-nine days after the ‘Do it for Dan’ campaign was launched, the once impossible goal of €2 million to get little Dan Donoher from Ballybrittas, Co. Laois, his life-saving treatment was met by rejoice the county and country over.

The rare genetic neuromuscular disease has a life expectancy of 18-24 months. A groundbreaking treatment, Zolgensma, is available in the US but at a cost of $2.1 million dollars for a once-off infusion.

Last week, the campaign celebrated a significant milestone in reaching the halfway mark, or €1 million. In an interview with the Leinster Express last week, Dan’s mother Aisling spoke of her astonishment at reaching the milestone so quickly. Now, exactly a week on, Aisling struggled to put it into words.

“It’s so, so surreal. It just happened so quickly. I don’t think any of us ever imagined this would happen in 49 days. When it happened and we got the call... words can’t describe it - it’s incredible.

“We thought this could take a year, or would it happen at all, and then to think that it’s happened so quick. It definitely hasn’t fully clicked, I know I told you the exact same thing last week after we reached the €1 million mark, but it certainly hasn’t clicked this time.

“From last week to this week it just spiralled. I don’t know exactly what it was, possibly it was all the GAA clubs’ fundraisers because they really kicked off.

“Niall works and it can be hard to get a minute to scroll on your phone when you’re alone with Dan, so we haven’t exactly been glued to the GoFundMe all day. I’d get a text every now and again and I’d go and look, and all of a sudden I’m saying ‘Oh Jesus Christ!’

“It just exploded over the week and I’m still stunned here, almost a state of shock. We didn’t even realise that we’d reached the goal at first. We were sitting out having our dinner, Dan was in bed, and I looked at my phone - and it was on fire. Like, what is going on here. So I’d say half the county knew before we did!

“It was unbelievable. We just sat there bawling our eyes out for ages. I’ll never be able to put the words together to describe that feeling,” said Aisling.

The previous Sunday, April 19, was when they reached €1 million. By Thursday, April 23, they had already hit their next major milestone of €1.5 million. Even at that point, the Donoher’s didn’t fully realise just how close they were to their target.

“I was speaking with the committee during the week and they wouldn’t usually tell us something until they are sure, but they were saying we were coming up close. It wasn’t until I saw it myself, the official post going up on the page, that it felt real.

“I was weak at the knees, my stomach churned and my hands were shaking. I went through all the emotions imaginable and it’s still not fully set in.

“Niall was working night duty on Friday night so Saturday is when we really celebrated here at home together. We cracked a bottle and got a nice takeaway, just the two of us and Dan, and it was special.”

Dan will hopefully travel to Boston in the near future to get the once-off infusion of Zolgensma, the most expensive treatment in the world.

“To be totally honest, it all happened so fast that we never thought we’d be at this point already. We were speaking with the consultants last week when it was at the around the €1.1 million mark and we were saying to them that we think this is actually going to happen - and then by Friday it actually did.

“So, as of now, there’s nothing planned yet for the simple reason we never thought it would all come together as quick. Now that we’re there, we can actually start planning and arranging the ins and outs of it all.

Such was the response to the campaign in recent weeks, the campaign committee had to make an important statement about upcoming fundraisers on Friday evening - alongside the announcement that they believed they were at their goal.

“The committee put out an announcement on Friday that they wanted all current fundraisers to stay going and finish them out, the monies from those had been included in their tallies, but any that hadn’t started yet to hold off,” explained Aisling.

“So the plan is to wait until all the current fundraisers close, tally it all up and see exactly how much we have, exactly how much Dan’s treatment is going to cost, and then whatever surplus there is will go back to other worthy charities and causes. We don’t have any exact figures yet so we can’t say definitively, but any surplus will absolutely be given back and redistributed to others who need it.

“There are so many other worthy causes and people who were in similar positions as us, and that’s the thing - don’t let it stop. Dan has reached his target and that’s amazing, but there’s so many different people and charities out there that we, the people, can help.

“Just look at what we all did in 49 days. It’s the most expensive drug in the whole world, and we did it in 49 days as a community, as a country. We did it for Dan.

“There’s so many other people in need of amounts nowhere even remotely close to the cost of Dan’s treatment. Think of all the good we could as a whole when we really unite and set our minds to it.

“This whole county and country have changed our lives. They’ve given us so much hope and we hope they can do that for other families too. If we all stay going, stay pulling together, stay running, stay doing the challenges and having the craic.”

To the vast majority of people, SMA was previously unheard of, but Aisling believes that Dan’s campaign has brought the disease into the common sphere.

“We’re just so happy that we got our message off the ground and it’s nice to see that SMA is on the map now. When this all kicked off, nobody had any clue what it was and now for people to know what it is and the struggles and obstacles facing families in the same situation.

“If, God forbid, your baby was floppy that people would say ‘no it’s not actually okay, we should get this checked out.’ Don’t be sent home thinking you’re an over-anxious Mam or things like that. The whole campaign has brought a whole new level of awareness and understanding to SMA.

“Our next push is to not stop here. Dan’s treatment is going to become available in Europe by the end of this year, and hopefully the Government will fund it so that no other family should ever have to go through this side of it.

“We’ve put ourselves out there, opened up and told our story as honestly as we could. It’s not the easiest thing in the world to get up there and do that either, so hopefully we can save another family having to go through the same and get the Government onboard to fund it,” said Aisling.

The Laois community home and abroad, and Ireland as a whole, has rallied behind the campaign with just about every GAA, sporting club or group in the county lending their support.

“What people have done for Dan, and every one of our families, it’s created such a lovely feeling around the whole country that everyone has come together and had fun while doing it.

“Apart from the obvious of Dan going to get his treatment, the campaign has done so much more. Any morsel of animosity between clubs is just gone now. And we shouldn’t stop now, there are so many causes we can all unite and get behind.

“Since this all started, Niall has said that he only thought he knew what the GAA was really all about until he saw this. The GAA is one big huge family.

“You have your teams, your rivalries, your usual givings out, but when something like this happens it doesn’t matter one bit if you’re from Timahoe, Courtwood, Portlaoise or wherever. It has really shown us the true meaning of the GAA.”

Now, with their target met and safe in the knowledge that their son will get the treatment he so greatly deserves, Aisling asked if she could pass on a message on behalf of the Donoher family.

“The post that went up on the Do it for Dan page on Friday night said, ‘It takes a village to raise a child, it takes a community to save a child’ - and it’s so true.

“We depended on absolutely everyone to get us through this and to our goal. Every €1, every €1,000. It just goes to show that when we all do a little bit, it’s incredible what we can all do.

“I just want to extend a massive thanks to the whole county for their incredible efforts. There will never be enough words for Niall and I to thank everybody for what they have done for us. They, the people, have given us so much hope for our little man.

“It’s almost scary to think what can be done when everyone puts their minds and hearts on one thing. Dan is the proof of that,” finished Aisling.