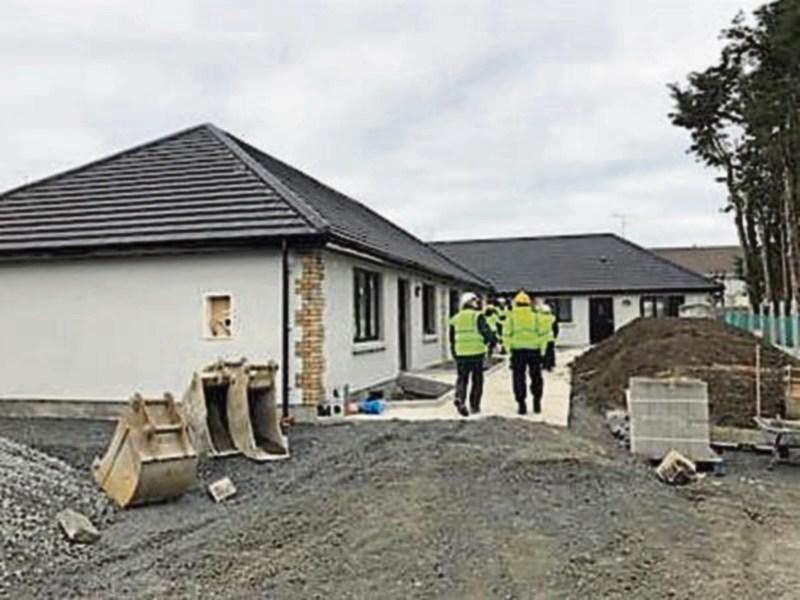 The North & East Housing Association site in Stradbally, one of three sites back at work.

Construction has resumed on unfinished council housing estates in Laois after a special go-ahead to return to work by the Government during the Covid-19 restrictions.

There will be 51 brand new homes ready for families on the Laois council house waiting list within the next two months.

Work at three building sites has resumed after a go-ahead was given by the Department of Housing and Local Government to Covid-19 restrictions on the construction sites.

The estates are in Portlaoise, Portarlington and Stradbally.

An exception was made because they are only weeks from being ready for council tenants waiting for a home.

The CEO John Mulholland announced the news at the April meeting of Laois County Council, held for the second month by phone conference on Monday April 27.

“Work has recommenced on the provision of social housing units, mainly through the Approved Housing Bodies. Those that will be ready within four to six weeks for occupation.

“They are on the Borris Road in Portlaoise, Kilnacourt in Portarlington, and on Main Street in Stradbally behind Dunne’s Pub which was in touching distance before the covid public health measures were put in,” he said.

The 17 Portlaoise homes are Phase I of a scheme carried out by Tuath Housing Association to be ready by June. Phase II of another 19 units is to be ready in August.

The Portarlington development is an 18 apartment complex built by Co-Operative Housing Ireland.

The Stradbally scheme is 16 units by North & East Housing Association for older people and those with disabilities.

“For some families that will be very positive news in the next month or so,” Mr Mulholland said.

Another 28 homes were allocated to tenants between March 13 and April 17.

“We are doing a significant amount of work as well in relation to contracts and briefs for other schemes,” he said.

Contracts are being exchanged on 26 acres on the Stradbally Road in Portlaoise. Once restrictions relax, work will also start on new houses in Rathdowney.