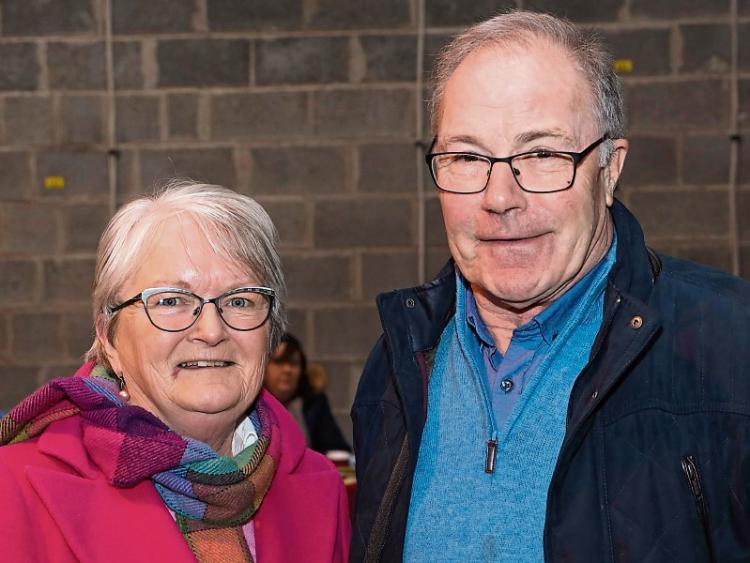 Portlaoise Municipal District began its first meeting in three months this May with a minute’s silence for a recently bereaved councillor.

They also sympathised with the many Laois families who have lost loved ones and been unable to share their grief with the community at the funeral due to Covid-19 restrictions.

Her colleagues all offered their sympathies to her at the May meeting, held in council chambers with social distancing observed by all attendants.

Cllr Sweeney thanked them and she spoke fondly about her late partner.

She said that he had supported her in the recent election campaign as she canvassed door to door, and greatly enjoyed the drama and mathematical workings at what was his first count (picture by Alf Harvey).

“I thank everybody for their sincere condolences. Jim was a super companion, a gentleman to the core and I miss him,” she said.

Cllr Catherine Fitzgerald had led the words of sympathy.

“My sympathies to Mary on the heartbreaking loss of her partner. He was an incredible gentleman, with a passion for the GAA. It was an awful shock, and very hard to cope with. My sympathies to you, Aoife, Conor and the McDonald family,” she said.

Director of Services Simon Walton offered sympathies on behalf of the local authority.

“Mary you’ve been very kind to me, and I consider you a good colleague and on behalf of my colleagues I offer you our sympathies,” he said.

Cllr Caroline Dwane Stanley also spoke and noted the distress experienced by all bereaved during the Covid-19 restrictions.

“My deepest sympathies to Mary on the death of her partner.

“We have lost an awful lot of people and we weren’t able to go to their funerals. I give my sympathies to all their families.

“But it is important we do not drop our guard now and we remain cautious, this virus will be around for a long time,” she said.

Cllr Thomasina Connell described the past while as “a hugely challenging time”.

“I commend everybody for following the rules, and express my sympathy to Mary on the passing of Jim, it is a very sad time for everybody,” she said.

Cllr Noel Tuohy also asked people to think of the stressful time it has been for priests in the county.

“I spoke to a priest at a funeral in Abbeyleix and he said it was his fourth one in 24 hours. That’s hard going,” he said.